Tique | art paper asks six questions to an artist about their work and inspiration.
This week: Hiroshi Takizawa. My production process always begins with gathering images by shooting/scanning various surfaces of this world. They mainly consist of stones and rocks which have contained time and memories, and other materials such as walls, floors, pieces of furniture, and concretes which have something to do with actions related to architectures. Utilizing these materials, my intention is to search for the relationship between the 2D world made by photos/images and the 3D sculpture works. In addition, by comparing the pieces of those collected images, I try to reflect on my point of view as well as on the gap I find between reality and fiction in this society. I believe photography tends to reflect them quite obviously even without consciousness. Therefore, I am interested in the phenomenon that appears as an image, which proves that the object is taken by a camera/scanner actually existed there. Also, by observing the gap/differences of distances and spaces that occur in between the world of my perception and the world reflected by photography, I do intend to present new dimensions through my creation.

In my childhood I wasn’t surrounded by much culture or art, the only direct experience with art was the drawing of “La Maja Desnuda” by the Spanish artist Francisco José de Goya, which had been placed in my grandmother’s house. At that time, I was probably attracted by the distortion of space and time that takes place even inside a single piece of drawing, rather than questioning the drawing itself, or asking ‘why is this women naked/why is she lying there’?

Destructions and constructions of architecture in my daily life and incidents such as murders, kidnappings, and suicides taking place in our society.

I am interested in concrete, which is often used for architecture. Unlike other natural materials like rocks and stones, not only concrete contains compressed actions inside, but can be duplicated just like photos, their forms can be changed flexibly which enables me to present memories from a different perspective compared to photos. In addition, I am attracted by the dual nature of concrete, since it could be harmful when tunnels collapse and they are sometimes used as murder weapons which make me consider there are some criminal elements inside concrete.

I am interested in fields such as criminal phycology and profiling methods used to detect suspects in of murder or kidnapping cases. By investigating things left behind on the crime scene and the photos captured there, we are capable of assuming not only the criminal’s behavior but also his/her background, personality and criminal record. Of course, it could help us find out the actual criminal, but in some cases, it leads to the introduction of a fictional person that does not really exist to the public, which I find interesting. At the same time, I am horrified by the power of a photo, which is the proof of existence in the past, because its image could sometimes generate reality and fiction at the same time.

I am now producing a sculptural work that is made by compressed actions, which have taken place in various materials such as photos, concretes, and resins. My intention here is to pursue the illusional image and its absence that appear from memories embedded inside photos, shapes/time compressed inside concretes, and time/forms fixed in resins. 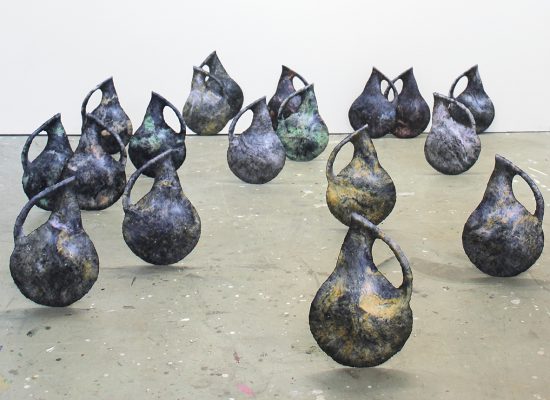