In 2020 Oliver Leu published the book “Leopold’s Legacy”, a result of years of research on colonial monuments in Belgium and the question of their value in today’s society. This book was not an ending, but a new beginning: for the artist it meant a partial liberation from the documentary, and an opportunity to look ahead at how we currently deal with monuments and commemorations of Leopold II, but also other figures from the colonial period, in the context of furious debates around decolonization and Black Lives Matter. At Tique, he presents new work around this research, created during a residency at the Frans Masereel Center, in a dialogue with existing works.

The video piece “Blankenberge” shows the monument to Joseph Lippens and Henri De Bruyne by the seaside. Day-trippers and other ‘flâneurs’ pass by this statue in honour of two soldiers from the era of the Congo Free State, without paying too much attention. This contrast between the charged group of statues and the flow of passers-by is a central question in Leu’s work: we rarely seem to dwell on our colonial history and the monuments that remind us of it; although protest movements are growing, and more and more voices are emerging, asking to remove, replace or re-contextualize such monuments.

Leu follows the trails of activism directed against representations of the Belgian colonial past, on the one hand in photographic work, and on the other in collages imagining alternative monuments. In his book he published photos of 221 street names that honour Leopold II, or otherwise refer to Congo and its colonial history. In the presentation of these photos, he leaves a white space for the streets that have since been renamed. The work resonates with the changes that are running through our society. It makes us (with cautious curiosity) look forward to a future exhibition, in which more white areas might appear.

In a series of embossings on copper print paper, Leu translates several images of activist interventions: statues that are removed from their pedestal or defaced. The paper finds a resonance in the paper base showing the video at the start of the exhibition. The white (in different shades) evokes a certain fragility, especially in the creased silk paper of the video base. The shadows created by this texture, as well as in the relief of the embossing, are near-ghosts: they are not consistently visible in every light or from every point of view. A white sheet also offers a possibility; of taking history into our own hands and of writing a new narrative today.

The exhibition is supported by dasKULTURforum Antwerpen. 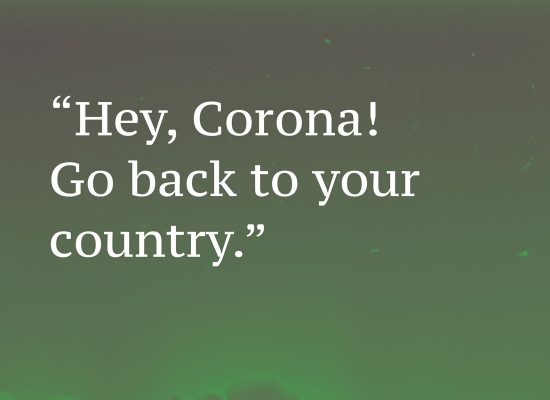 Eun Lee – The Poster Series, as a part of ‘What should we have talked?’ Project