Tique | art paper asks six questions to an artist about their work and inspiration.
This week: Liesbet Grupping.

I use photography and other (visual) instruments to translate impressions and ephemeral phenomena as well as the observations that emerge of those. My practice consists of looking at things so thoroughly you (think) you can understand them. I construct images on the basis of (rigid) concepts and deconstructive methodologies wherein the erratic and subjective intervene. I love to twist the prescribed or convential use of cameras and apparatus. Drawings of the wind, for instance, consist of drawings and a photograph. The drawings are made by inversing the conventional way of drawing: instead of pressing the pencil on the paper, the wind lets the paper move underneath the pencil point. The photograph is generated through a black bag featuring a hole as well as a 4 x 5 inch slide – as a mobile camera obscura, if it were; which is lifted up by the wind. Flirting with media and techniques, abstraction and registration, documentation and (re)presentation generates questions on both the process and the content of the images. Through my work I endeavour to demonstrate that there is no such thing as a single ‘true’ reality. Every action, be it consciously or not, can lead to new insights.

Difficult to point… As a child I wanted to sing, act and design my own world. But after the first experiences in presenting myself I turned away from artistic expression. At later age, around seventeen, I was really impressed by a deep blue painting that gave me an intense sensation of space. I encountered it in the Scottish National Gallery in Edinburgh. I don’t remember the title or name of the painter. This sounds like the moment to visit Scotland again.

Liesbeth Grupping - Earth #2, from the series Matter in progress (2010)

A side road. Actually, having the time to take a side road.

As I’m reading several books at the same time, I’m working on different pieces simultaneously. For instance, I’m developing specific similar pinhole-cameras. I will use these identical cameras simultaneous in an attempt to capture a lapse of time by colors. Along this experiment, I’m working on a – still untitled – piece about the color blue. Through the presentation of images and text I intend to indicate what blue (can) means for me; apart from meaning, to show its muteness. Generally, I’m Influenced by the words of Ludwig Wittgenstein’s: “If we are asked, what do the words red, blue, blacks, white mean, we can, of course, immediately point to things which have these colors. But our ability to explain the meaning of these words goes no further.”  Last year, I worked with four other artists on a filmic music-performance called Polar Night. Through this artistic dialogue between photography and language arose a new collaboration: Public Poems. In Public Poems Ine Van Baelen and I attempt to reveal the daily sense and nonsense of a public place, which is probably used differently. Meanwhile, I re-search my archive to develop yet undeveloped pieces by rearranging them, organically, if it where. 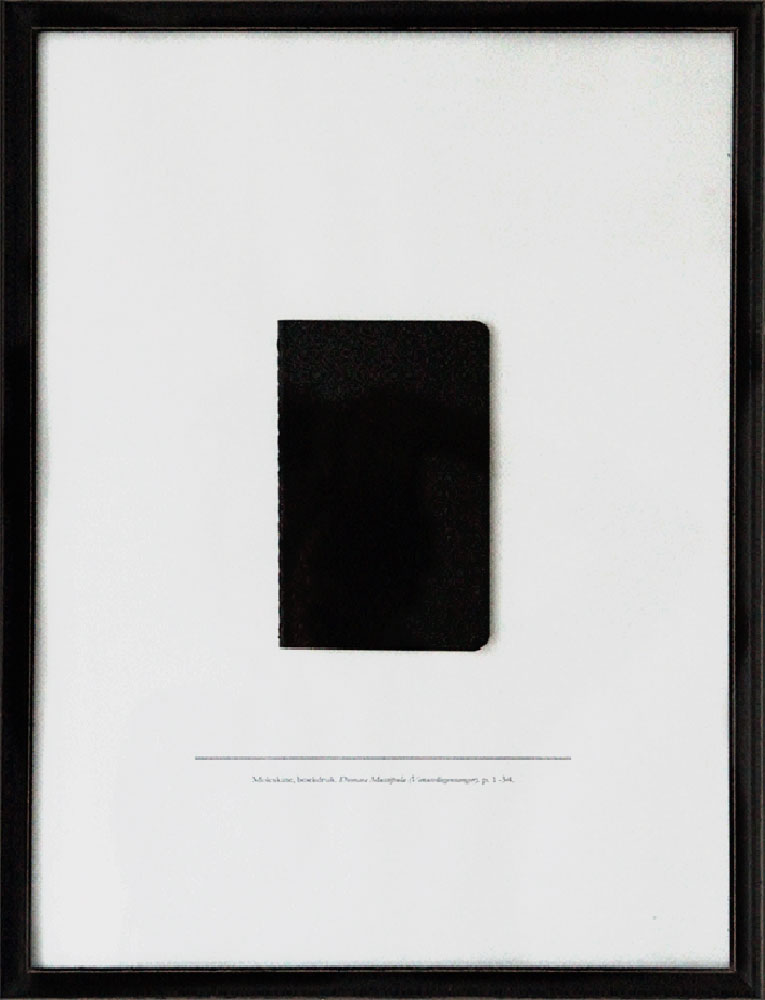 More then twice I read Bluets from Maggie Neslon. To me, it is a collection of refined words about love and philosophy that points out the versatility of a color, in this case the color blue. It was the first time I read a book from her; now I’m eager to explore more. Another work that impressed me recently was the show of Gerard Herman ‘Braaf Qua Jongen’. In his colorful installations the pieces look like music and play a sharp symphony together. Before I only knew his with humor-refined pieces of language and images – I am happy I got to discover a different angle of his work.