The artist presents an exposed and complex mechanism. The machinery, made of pulleys, cables, tubes and weights with all its complexity laid wide open. The pieces cause a tension with the elements of the space, in their verticals and horizontals, the high and low elements, the full and the empty. Text Fernanda Pitta
All images Courtesy by the artist

Arranged in succinct operations, in what we could call reverberations, pulleys zig-zag across each other and steel cables constrain and are constrained by tubes of sand and weights. These simple elements create a game of strengths in the space, where they create tensions and, at the same time, draw shapes. Design and structure are made explicit, re-presenting what was drawn – what was in the design – at the same moment that these dynamic and hidden, though potentially existing, forces are materialized. Nothing is hidden from the spectator’s view, not even the dust from the marble that fills the tubes and balances the washers supporting the structures. Everything is very clean, clear, well-lit and polished.
Yet, rather than creating the experience of something being revealed, this strange machinery transmits, instead, a feeling of perplexity. The space cannot be described or unveiled, or understood, by its mechanisms. Unlike an experience of modernist architecture, where weights, dimensions and other material qualities of the space are always made clear to the viewer (thinking here of MASP’s parallelepiped) and, although the spatial dimensions and forces are all explicit in the space that Pastore has created, the function and the objectives of this spatial-structure are indiscernible. If the viewer can understand, and therefore master, a modernist space, here they are unable to reach that totality. Herein lies the interest in the work.
The elements of the space are not distinctly or clearly felt from the unique and indivisible point of view of a supposedly universal subject. The experience of these elements comes from an initial imperceptibility, which forms a visual perception of weight, that transforms into a tactile sensation, and then into a kinetic one, guiding the course that the individual submits to, in the ways that their body behaves throughout that course. At the end of the process, the machine is complete, revealed, even though no sense of satisfaction, or of completeness, is produced. You experience the intensification of a promise of completeness, that is generated by the machine in the space, but the result is one of restlessness.
Although we are fully aware of the workings of the machinery on show, we have profound difficulty in embracing it as a whole. Something is produced that obscures what is right in front of our eyes. It is a clarification that blinds. In its complete honesty, the structure proves its explicit complexity.
The work bears a certain likeness to mechanisms created by contemporary artists such as Olafur Eliasson and Anish Kapoor. But, unlike in their work, where the intricacies of how the devices work are usually hidden or not made evident, here, everything is there to be seen. What we experience is the sensation of a certain circularity, of an expansion and binding of the senses. 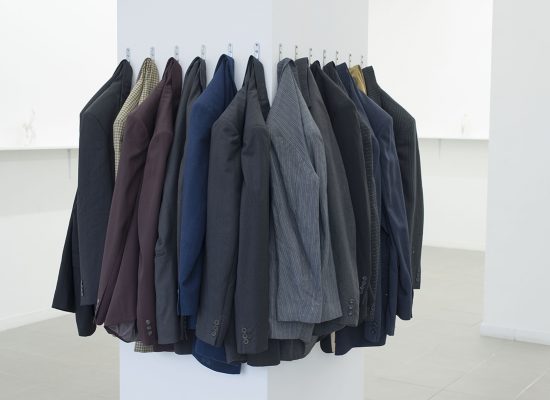