The exhibition Short Memory, curated by Ory Dessau, presents a selection of works by artists whose practice follows, imitates, relates to, and criticizes the operational logic of archives. Each of the artists included in this exhibition has been associated with the gallery where it takes place, Galerie Micheline Szwajcer. Their joint presentation provisionally initiates a temporary, incomplete, in-situ archive of the space it occupies.

The title Short Memory is an abbreviation of the concept short-term memory, which describes the cognitive faculty of the human mind for holding sensory events, movements, and cognitive information such as digits, words, names, or other items for a brief period of time. Yet, in the context of everyday language, the title also indicates an incapacity to remember or learn from past experience, symptomatic of a fragmentary, dehistoricized perception of reality.

On Kawara’s (1933–2014) One Million Years (Past – For All Those Who Have Lived and Died) and One Million Years (Future – For the Last Ones) (both 1999) encapsulate the function of the archive in the sense that they are an attempt to accumulate and store time by means of chronologically enumerating one million year dates until and from 1999. Registering the years from 998,001 B.C. to 1,001,999 A.D., the two books stretch culture’s pretention to historical recording ad absurdum, delineating a time span that exceeds the grasp of human comprehension and scientific methodology. Throwing us one million years backwards and forwards in order to imply the impossibility to keep track of such a vast chronology, the two books simultaneously expose and deconstruct the definition of the archive as a vehicle for storing time.

The Playmate (2012) by Richard Prince (1949- ) and Untitled (no year) by Hans-Peter Feldmann (1941- ) exercise the operational logic of the archive in a different way, referring to the circulation and distribution of bodies, objects, and images through various communication systems and technologies. Prince’s Playmate reflects on the transformation of the naked female body into a reproducible image, an impersonal mass=consumed commodity amidst other impersonal mass-consumed commodities. Feldmann’s Untitled narrates an exchange between human subjects, painting, and photography, during which a female model becomes a painted subject, a painting becomes a photographic reproduction, and a reproduction becomes a postcard.

Trigger Finger, the 1994 video installation by Douglas Gordon (1966- ), intervenes in the fabric of early twentieth-century black and white medical footage, a filmed documentation of a treatment for shellshock given to post-traumatic veterans of WWI that the artist decontextualized, modifying an extract from it. In it, an isolated bare hand in a locked-in gun gesture appears as if it is about to pull an imaginary trigger, but then a sequence of involuntary spasms is triggered, leading back to its frozen position, and so on. Gordon’s interventions in the archive of the moving image, and specifically the history of cinema, are at once iconographic, material, and temporal, turning the printed film roll, the technical mechanism of cinematic projection and historical motion pictures into elastic physical apparitions unfolding in real time and space.

For Lili Dujourie (1941- ) the archive is not just a record of history, it is the canonical codex of culture. Dujourie’s practice responds to canonical forms, styles, and modes of expression and produces alternative critical versions thereof. Her work can be considered a reevaluation of genres and schools from art history. Côté Couleurs, Côté Douleurs (1969) and Côté Couleurs,

Côté Douleurs (1969) the two sculptural/painterly wall- floor arrangements currently on view, undermine the purely phenomenological approach of the minimalist canon, utilizing its aesthetics of reduction and literalness to create a silently suspenseful situation in and of space. Each work consists of a monochromatic wall-painted color field extending from the intersection of the wall and the floor. One Veronese green, the other ultramarine blue, each color field is almost completely concealed behind a pair of identical steel plates that lean against the sides of the painted wall section, leaving an interval of approximately fifteen centimeters between them in the middle of the color field. Out of this interval a stripe of visible color emerges, marking the works as a constant shift from presence to absence, appearance to disappearance, containment to porosity, integrity to disunity, and back. 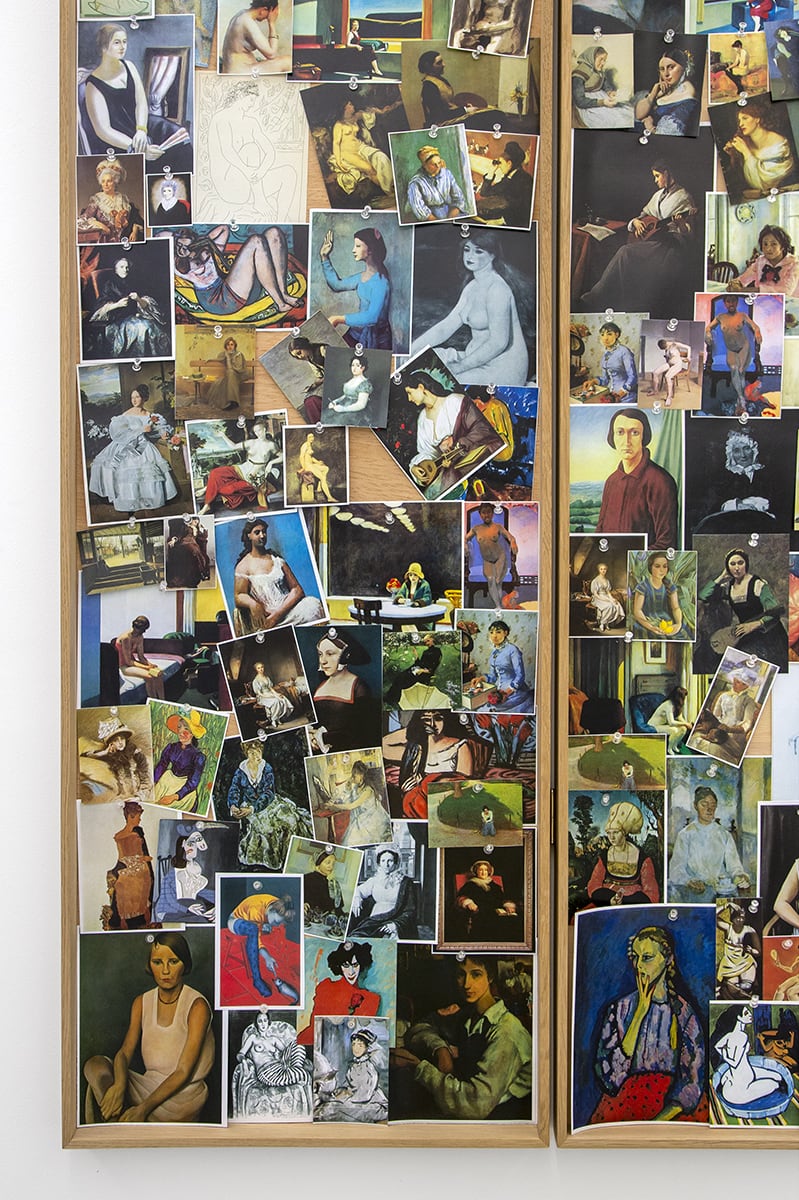