In Kürten’s exhibition under the illusion of structureless splendor, the subjects of ‘Twen’, generational division, and repetition are all assembled. Here, in addition to her use of repetition as theme, the artist also folds in a critique of nostalgia. As with her prior collages, Kürten adopts the aesthetics of advertising—albeit those of a bygone era. A constellation of large-scale framed pieces of text and found imagery coalesce to form one artwork.

In an audio piece from 2018 by Sarah Kürten, two protagonists are trapped in a conversation that is going nowhere:

After a couple of reprises, they continue:

As the voices continue to echo with one another, it frustrates, becoming increasingly difficult to listen to. Repetition, here, is used by Kürten as both subject and process, but it remains rooted in an exploration of the nuance of language and speech, of the mechanics of a circular conversation.

Since this work was first produced, repetition as idea, as method, as theme has continued to percolate for Kürten. In her text, No Hard Feelings (2020), written for her own journal ‘In Numbers’, she expands repetition from its linguistic, or formal, potential, into a critical examination of generational progression. The narrative is written in the third person, but it is based on the artist’s own personal relationships, and the matrilineal line of her family—herself, her mother, her aunt, her mother’s mother. Kürten uses the text as a space for self-reflection on familial patterns, and, perhaps, bad habits. It is not a happy tale, but one of poor choices and oppressive conditions. The story easily sits among the confessional writings of authors such as Maggie Nelson, Chris Kraus and Kathy Acker, who make their emotional lives available to the reader. Among her pages, Kürten laments on how quickly, once in a relationship, ‘Twen’-Mothers Daughter assumed all of the domestic labour, of putting her partner’s needs before her own, of accepting recurring abuse. The arc of Kürten’s story is set out to demonstrate the repetition of mistakes, often unwittingly, passed down from generation to generation—of learned behavioural patterns. Like Kraus et al, Kürten uses the micro to explore the macro: the personal bleeds out to address wider concerns, namely the roles either assigned to or assumed by women in society (if these can be considered mutually exclusive at this point). Her reflections become a kind of metaphor for a history of feminism, whereby although each generation makes a number of strides forward—firmly believing in their own progressiveness—the overriding patriarchal structures remain intact, meaning that, in actuality, only incremental change has occurred.

The affix of ‘Twen’- to the women’s positions (mother, daughter etc.) is faintly barbed. ‘Twen’ was a magazine published in the 1960s and early 1970s in Germany. Aimed at people in their twenties, the readers were from Kürten’s mother’s generation. The magazine contained liberal articles on art, music, architecture, relationships and politics. Its design is still considered ground-breaking today. The designer, Willy Flekhaus, used cutting-edge photography and simple Bauhaus and Modernist-influenced typography to create innovative and visually striking layouts. Much like the characters in No Hard Feelings, ‘Twen’ could be considered to be deficient in terms of its ability to foster real radical change among its readership. It could be argued, that despite running seemingly progressive articles on topics such as oral contraceptives and gay relationships, it still had a narrow viewpoint about what it meant to be a woman in the 1960’s. Discussion of jobs for women, for example, remained gendered and conservative. 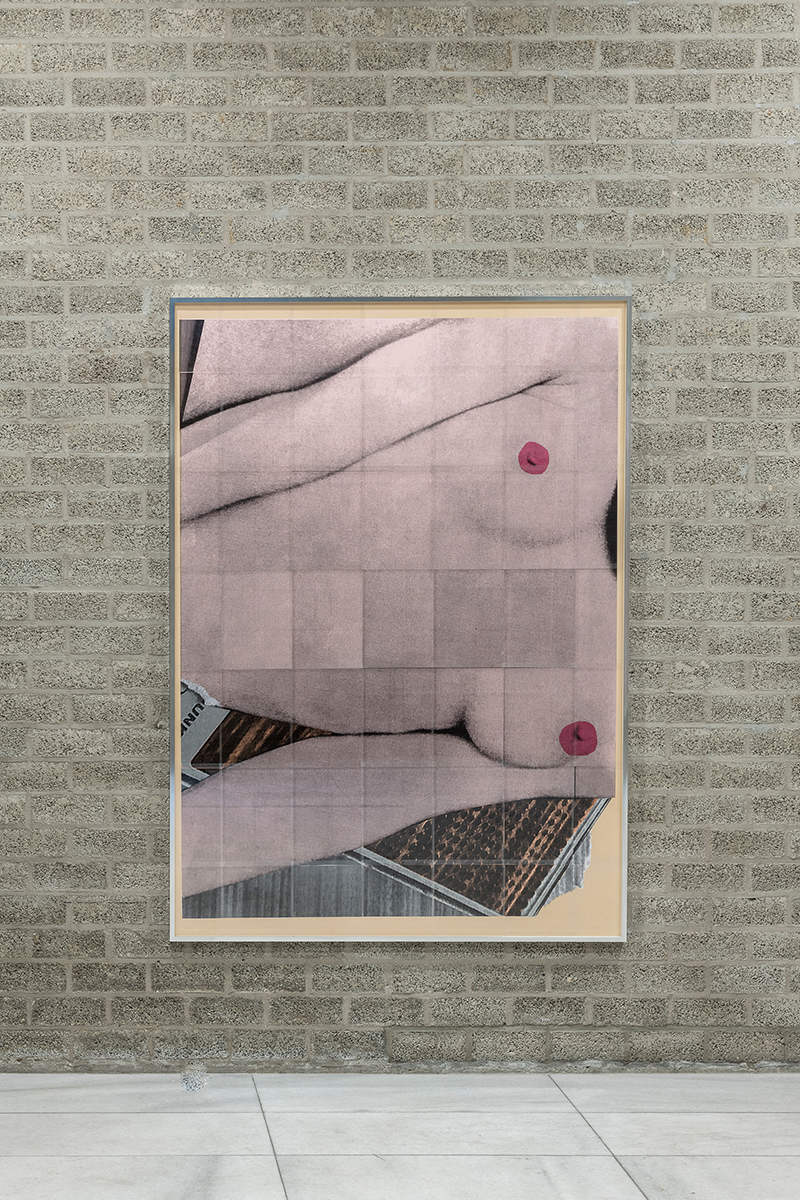 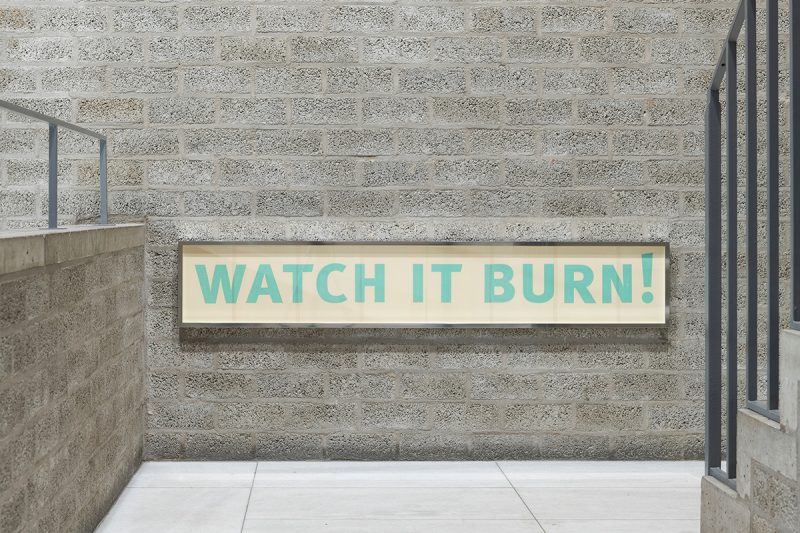 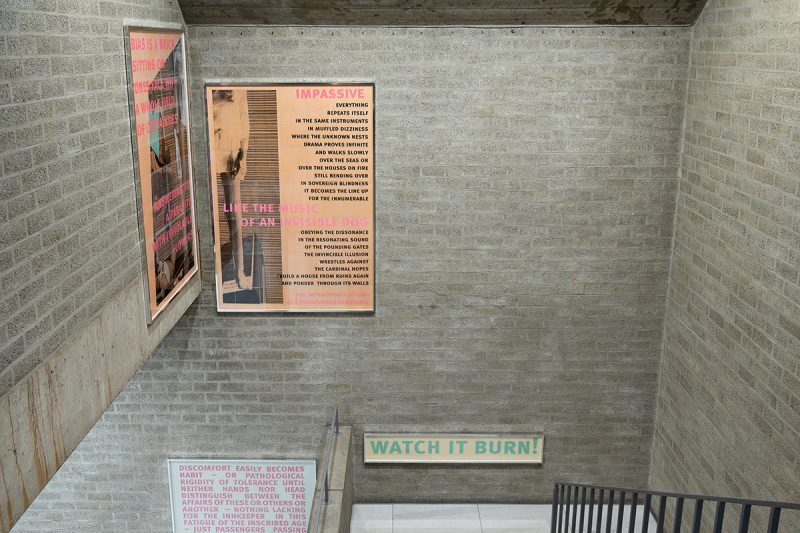 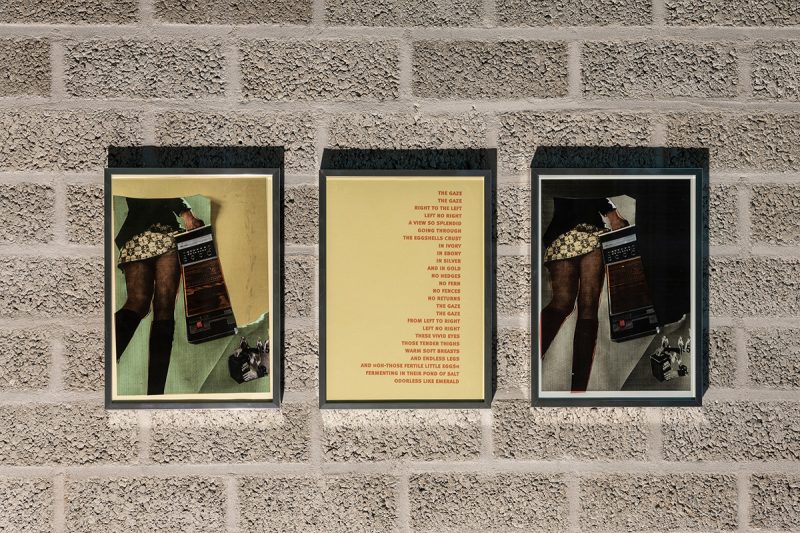 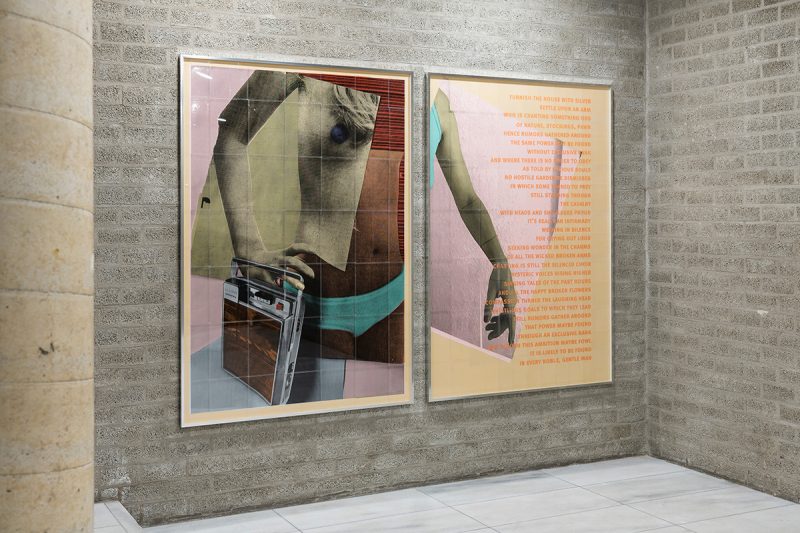 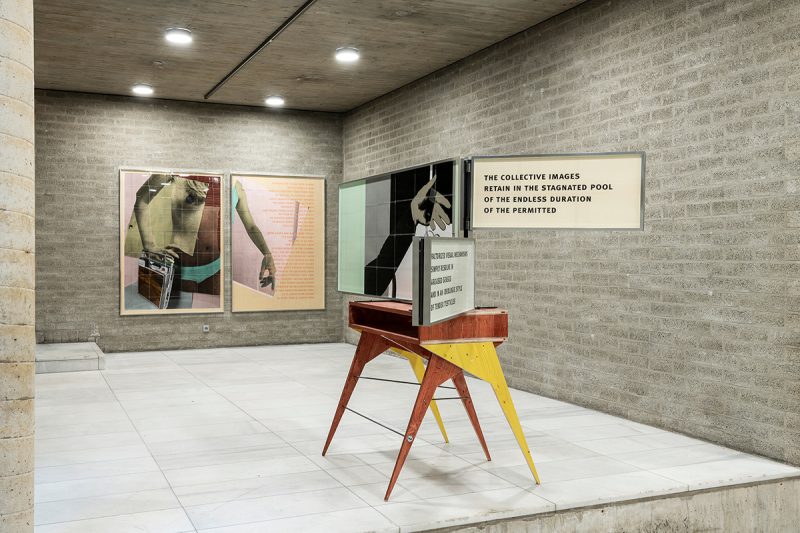 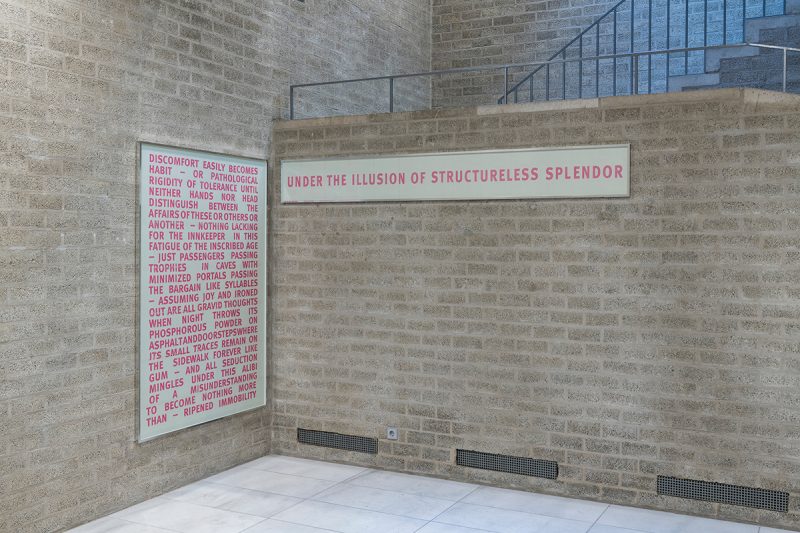 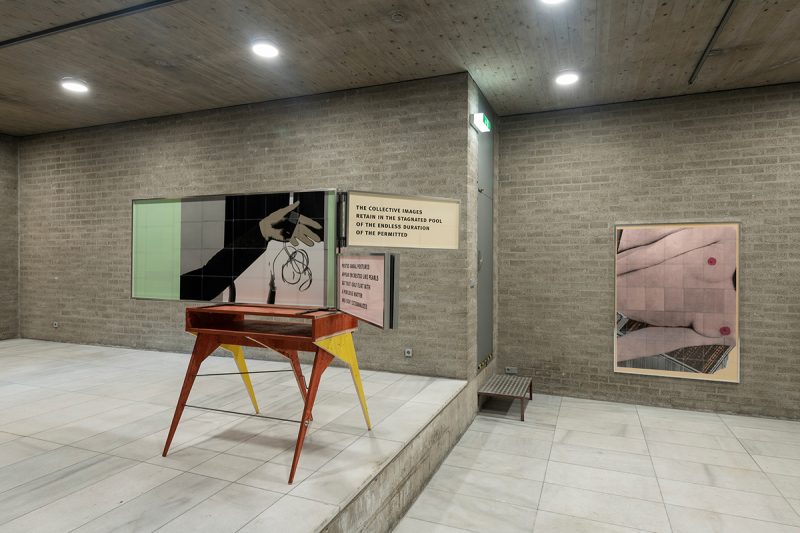 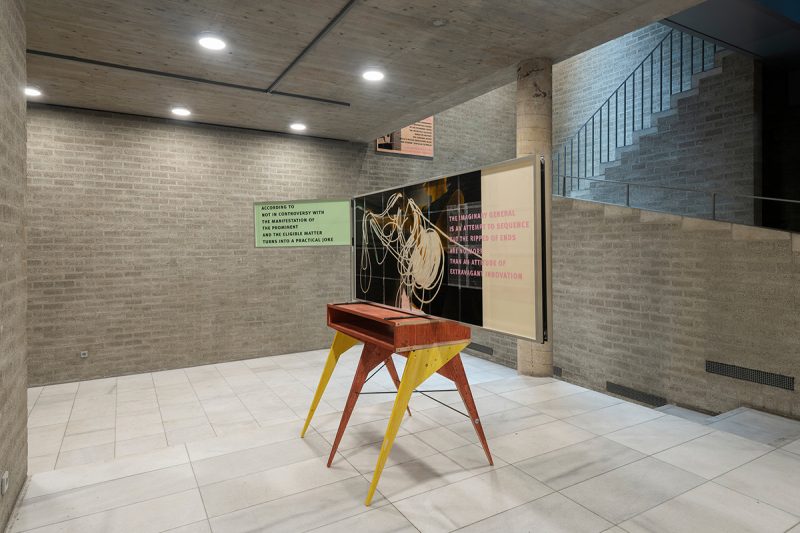 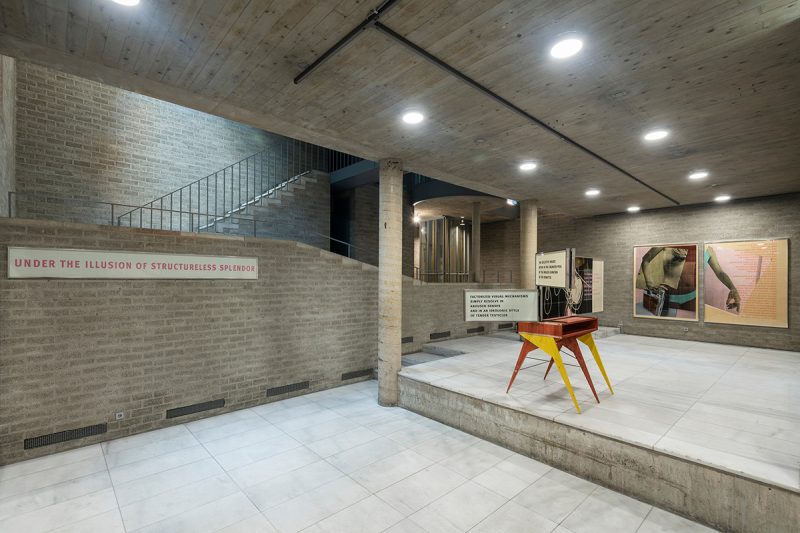 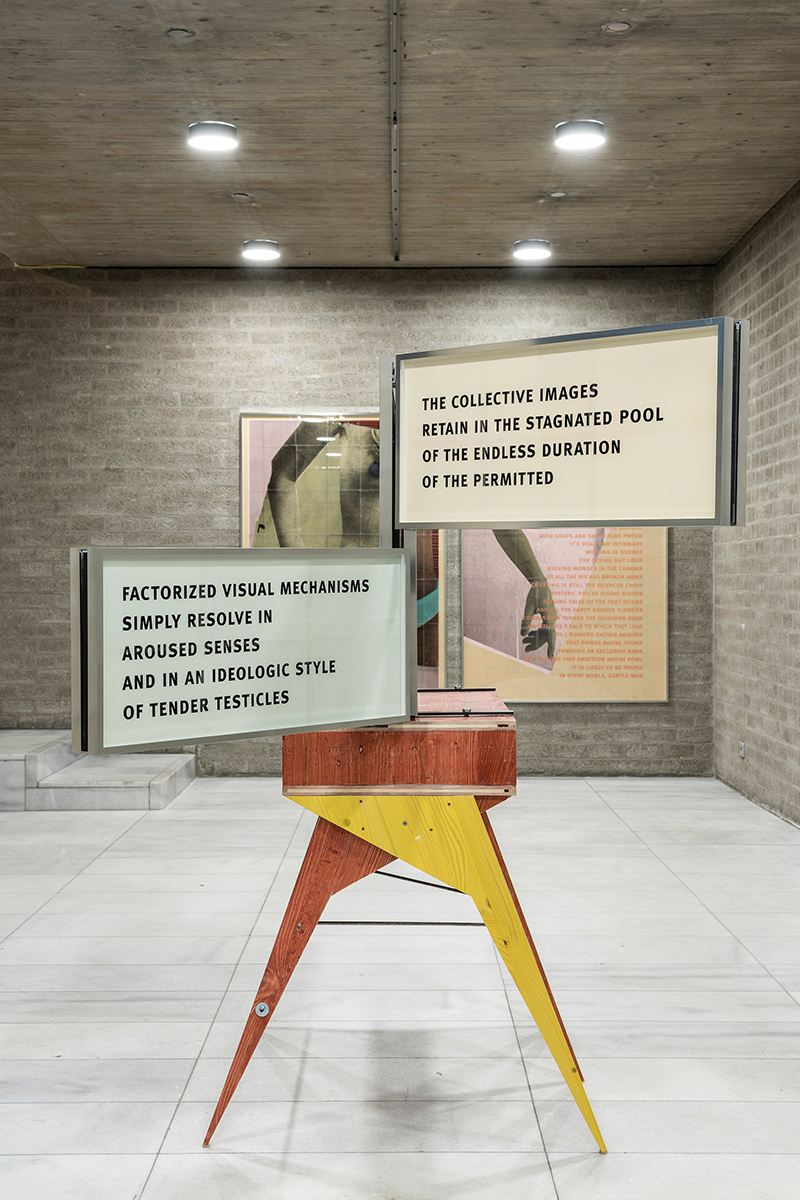 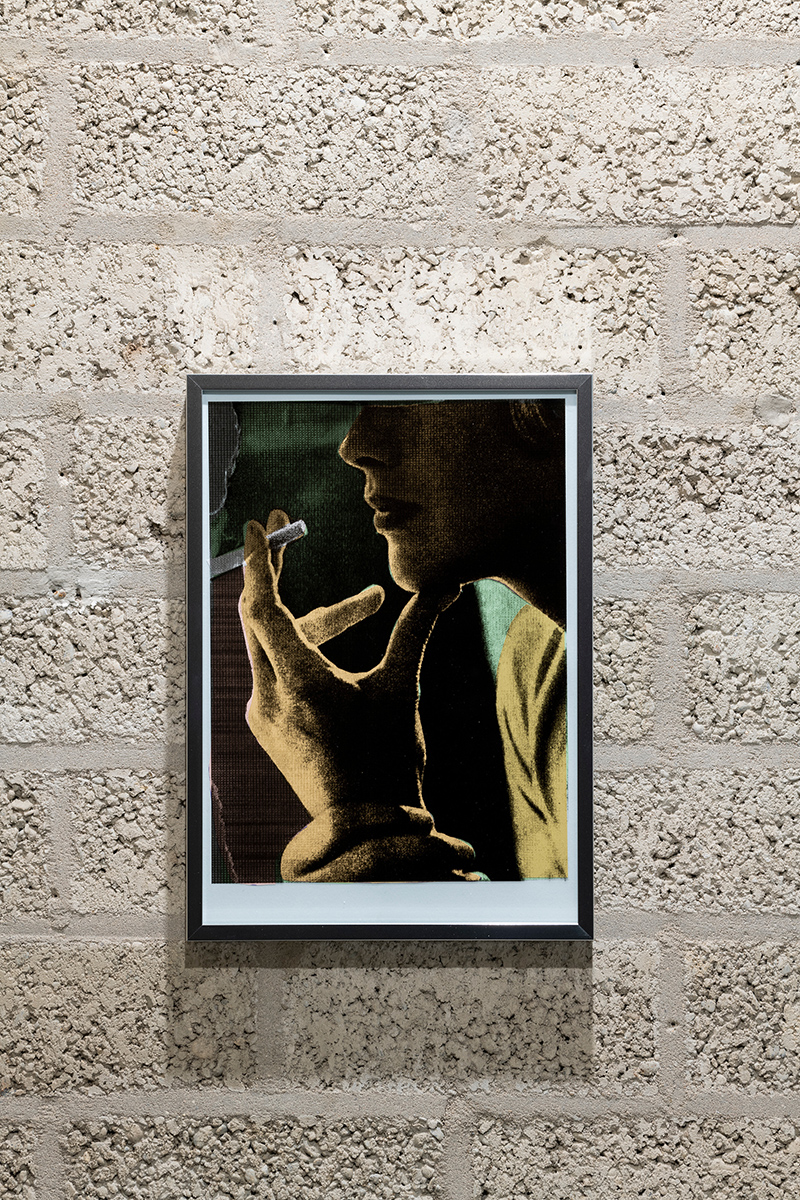 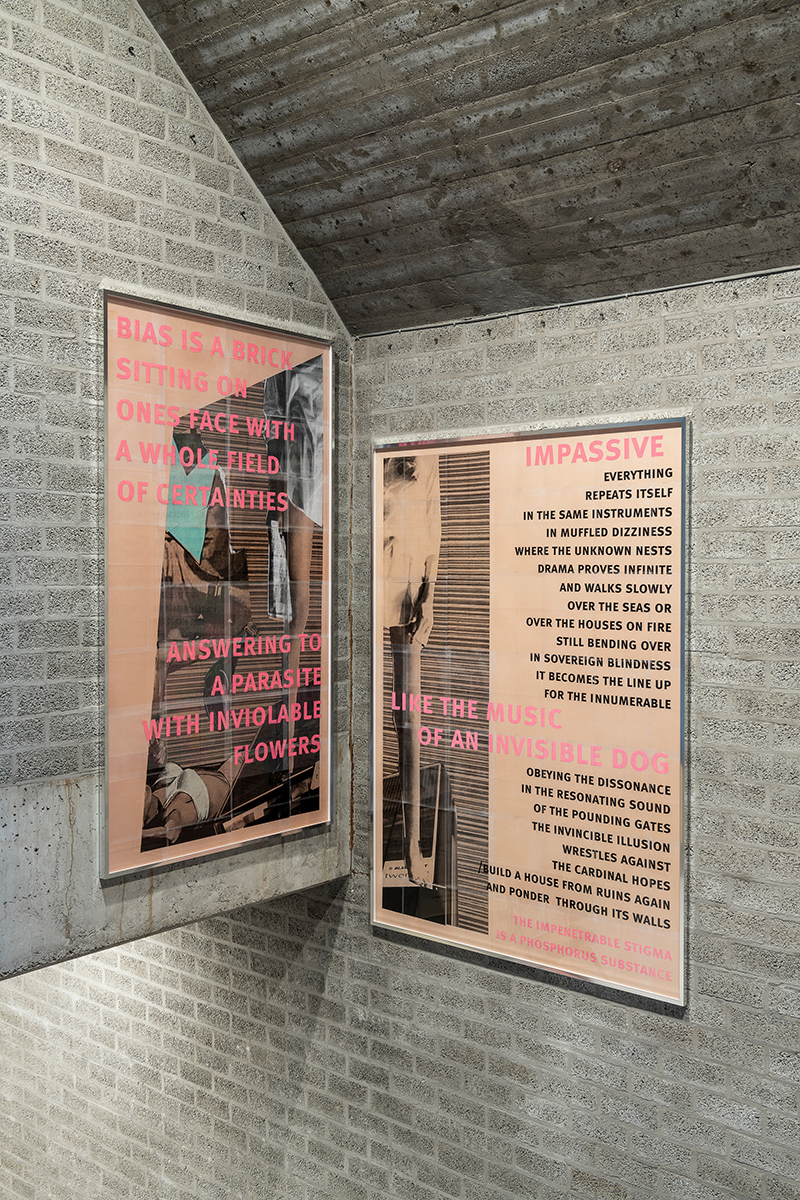 In Kürten’s exhibition under the illusion of structureless splendor, the subjects of ‘Twen’, generational division, and repetition are all assembled. Here, in addition to her use of repetition as theme, the artist also folds in a critique of nostalgia. As with her prior collages, Kürten adopts the aesthetics of advertising—albeit those of a bygone era. A constellation of large-scale framed pieces of text and found imagery coalesce to form one artwork. The colours she has used in previous collages are soft and muted—it is not explicit to which time period they belong—yet they recall a 1960’s mint-coloured Buick, or a rusty orange used in a piece of 1960’s Formica furniture. In her latest collages the images are mainly taken from Twen magazine and placed alongside texts. Written by Kürten, they poetically ruminate on the persistent issues that women face—domestic violence, intellectual erasure, every-day sexism, and objectification. THE POET (without them he could not have written a line of his work) (2020), is a three-part work that has a framed text as the centre panel, flanked by two framed collages. The same image of a woman in a black and white mini skirt holding a radio, is used in each, but its treatment by the artist differs. The original photograph was shot from below, so the viewer is essentially looking up the woman’s skirt. Her black tights and the shading help to obscure the view. The way she holds the radio against herself means that her skirt ripples slightly upwards on one side. In looking at this image I cannot help but think of the seemingly endless argument against victims of sexual assault, who are deemed somehow responsible because of the clothes they were wearing, of being sexually provocative. The text speaks of the (male) gaze, of the objectification of women’s bodies, of fertility, of femininity. The title of the work points to the notion that women consistently support men’s livelihoods—the woman behind the man. In both the sound piece TOSS ME MY LIGHTER, COULD YOU BABE? and the collage IN TUNE (even when physical incidents are not occurring, the mental atmosphere stays the same) (both 2020) abuse takes a central role. Where the latter’s title speaks of the underlying fear that victims of abuse constantly live in, the former replicates the weight of this heavy atmosphere through a constant dull hum that ebbs and flows but is undeniably sinister. The voiceover speaks of frequent criticism, of repetition, of increasing alienation. The photographs used in IN TUNE are, by comparison, seemingly much lighter, as they show women in various stages of undress—one wears a white shirt with bare legs, another is lying down in her underwear.

From a purely visual perspective, the images that Kürten has used in these works are beautiful—they have that seductive grainy quality that you only get from old film photography. The sculpture LOOK AGAIN (you save much effort by leaving your meaning vague, not only for the reader, but for yourself) (2020) is reminiscent of a vintage advertising frame with moveable panels. The objects in the photographs are old fashioned pieces of sound equipment—radios and stereos—that have a certain aesthetic desirability. This is the kind of nostalgia that Kürten is hoping to explore in this body of work. The nostalgic yearning for mid-century design has exploded in recent years—my generation long to fill our apartments with furniture that parents and grandparents couldn’t wait to get rid of. Kürten’s focus on Twen plays into this narrative even further, not only because of its overly fetishized design, but also because it had its own nostalgic take on early modern typography. This cycle of looking back longingly, Kürten seems to be saying, is another form of problematic generational repetition, or as Svetlana Boym argues: ‘in a broader sense, nostalgia is rebellion against the modern idea of time, the time of history and progress. The nostalgic desires to obliterate history and turn it into private or collective mythology, to revisit time like space, refusing to surrender to the irreversibility of time that plagues the human condition.’

In May, amidst the first wave of the coronavirus pandemic the writer Rebecca Solnit published a piece titled Masculinity As Radical Selfishness, which spoke of collective responsibility and the burden of care. She described that in America, under the stay-at-home decrees, in heterosexual two-parent families, women were doing most of the work—they became responsible for domestic chores and nearly all the home-schooling of their children. It was an article that I discussed with several of my heterosexual female colleagues and friends, who had each angrily felt the unfair burden of domestic labour and childcare responsibilities during this period. Just as Kürten’s personal reflection in No Hard Feelings resolved—it was a stark reminder that as women, our collective progression is still found wanting, as those deep-rooted patriarchal structures keeps us bound to this circular conversation.

Solnit concluded her article by stating that a cure for the gendered burdens of Covid-19, was in short, feminism. She wrote, ‘feminism is just a subset of human rights, and the universal human rights and absolute equality would answer all those questions about what to do about coronavirus and nearly everything else.’ One of feminism’s principles is the admission of our mistakes, to learn from them and in doing so, find a path to meaningful change. Kürten’s latest work would seem to fall among this category. It is a brave meditation on one’s own complicity in falling into the trap of upholding a stagnant system, still in need of radical revolution. 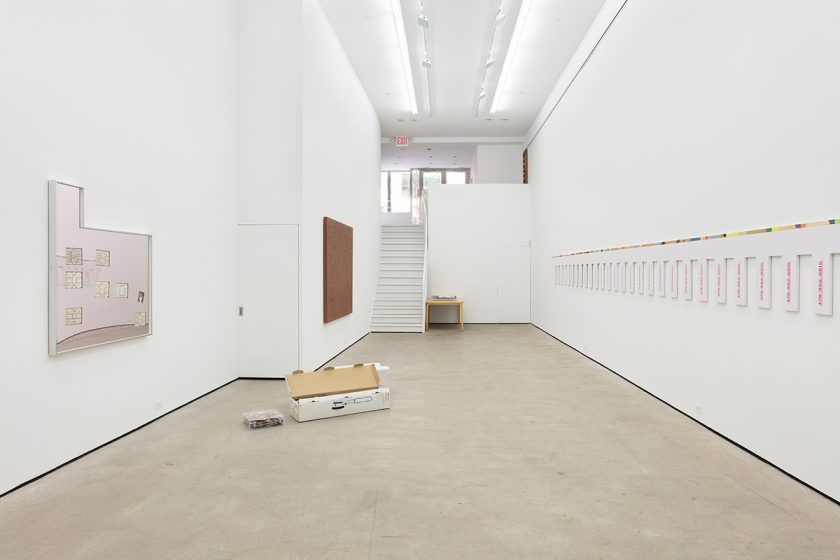 Torey Thornton – Does productivity know what it’s named, maybe it calls itself identity?