A museum of the present must always be a different one. In a time of constant change and the attending sense of powerlessness, the exhibition Museum seeks to open up and occupy new spaces. Rather than critically questioning the institution, the focus is on exploring its possibilities.

With works from the collection, new productions and loans, the exhibition Museum strives to unfurl the current liberties of art and thus of the present museum. Gestures of configuration, transformation and transgression here aid in the endeavour to conceive of – and make perceivable – the Other.

The museum is to be understood as a working title.

Visitors entering the central exhibition hall of the museum may be astonished by its emptiness. The expectation of finding something palpable, something that is visible and perhaps even comprehensible, is probably one of the subconscious assumptions we associate with the exhibition space. Looking for something that has already found you (The Invisible Push) makes no visible changes and o ers only a view of the building architecture. Yet a relationship emerges between our bodies and the surroundings when we notice the invisible wind. Neither here nor outside the museum walls is our perception of the wind a matter of choice, nor is the sensation something we decide to feel. Perceptible in gradual differences, the elusive wind stimulates our largest sense organ – our skin. What we perceive is the embodiment of the change that captures the body.

In Elster, a work he realized in 2004, Olaf Nicolai responds to the findings published shortly before by the research group led by psychologist Helmut Prior from the Goethe Universität in Frankfurt am Main. Prior offered the first definitive evidence that magpies can recognize themselves in a mirror. Consequently, this ability, previously attributed only to elephants, chimpanzees, gorillas, dolphins and humans, now had to be recognized in a member of the bird family, which represents a very distant branch of the evolutionary tree.

In placing viewers of his work in the position of an observer, Nicolai tells yet another story that is absent from the photograph — the history of comparative behavioral research. The magpie remains objective, outwardly unmoved, as it faces its image in the mirror. It neither assumes the jubilant poses typically adopted by children when they recognize themselves in the mirror for the first time between the ages of six and eighteen months nor does it attempt to peak behind the mirror to see whether another animal may be hidden there, as cats are known to do.

Thus in Nicolai’s work, the unexpected recognition of its own mirror image represents a difference that distinguishes the magpie from other animals faced with their mirror images.

Anne Imhof has created a new work especially for the triangular space on the museum’s third level. Following the symmetry of the space, a steel support containing large panes of glass is mounted on the wall. The work is structurally like an architectonic element, constructed like a frame, and three-dimensional like a sculpture. It makes reference to the structure of the luminous ceiling as well as to the horizontal direction of the floor and vertical direction of the wall. It opens up a new space by blocking o the tip of the triangular space. Together the hardness and clarity of the glass and the industrial nature of the steel are in contrast to the post-modern architecture of the museum building with its rounded columns, variety of shapes and visual axes.

Jana Euler realized a triptych for the museum’s central stairwell, where a bridge on the third- floor level links the two wings of the building. Frank and precise, the work concentrates the gaze in the void where various sightlines and access points converge. Like the museum building itself, which despite its symmetry prescribes no specific route, the work suggests neither one unambiguous perspective nor an ideal standpoint. The triptych is differently configured depending on the point from which it is viewed. Viewers find themselves in front of, next to or seemingly within the work—and thus become a part of the picture, see- ing as well as being seen, and hence multiplying the gaze.

On Kawara started his Today Series in 1966. Known as Date Paintings, they are mostly small-format canvases to which he gave a subheading, for example, a long quotation or a brief comment relating to world events or something more personal. He also added a clipping from that day’s newspaper to their cardboard storage boxes. The number of pictures produced annually varied and over the years they differed from one another without any recognizable rule as regards format or color. The way the date is written corresponds to the artist’s whereabouts at the time. With a total of 36 pictures covering the period up to 2000, thus from the start of the series until the end of the century, the MMK holds the largest collection of date paintings.

Li Liao occupies public space with a simple gesture in his Single Bed series (2011). After clearing most of the dirt from the ground and thus marking out a spot roughly the size of a single bed, he lays down (after spending several sleepless nights in preparation) at different places in the city and sleeps until he wakes or is awakened by someone or something else. In A Single Bed No.1 (Optics Valley), random passers-by in the Optics Valley shopping mall become witnesses to an event — a film shooting — from which Li Liao remains aloof in his sleep. For viewers of the video, the behavior of the passers-by becomes the actual focus of attention. Under the influence of their curiosity, irritation, concern or apathy, or as a result of intervention by the police, the significance of the sleeping body becomes increasingly unclear. Li Liao reveals the irritating effect of the realization that the context assigns no meaning that could contribute to an interpretation of the perceived action. Is sleep a personal matter? Is sleeping in public space permitted, and, if so, under what circumstances?

Tony Conrad advertised his Yellow Movies in 1973 with the title “World Premiere Exhibition of 20 New Movies”. What visitors to this one-night presentation saw at the Millennium Film Workshop in New York was an exhibition of static images. The large-format works on paper — 23 in all in contrast to what was announced—show black brushstrokes that are sharp on the inside and irregular on the outside, bordering a light-colored rectangle that inevitably reminds the viewer of a blank cinema screen.

As Conrad used slightly light-sensitive colors (common house paint), the blank projection surfaces or unexposed frames in the Yellow Movies react to their surroundings, yellowing and darkening with the years. So if someone stood in front of the “screen” and remained still for just long enough — months if not years — a visible impression would be left behind. Without such a long action in front of the image, it is primarily time itself that is inscribed or registered. As this is barely visible to the human eye, the Yellow Movies ultimately refer to the materiality of the picture medium — here painting—in order to spatialize the film’s defining relationship between time and light. In their slowness the Yellow Movies defy cinema’s usual speed and illusion of movement. 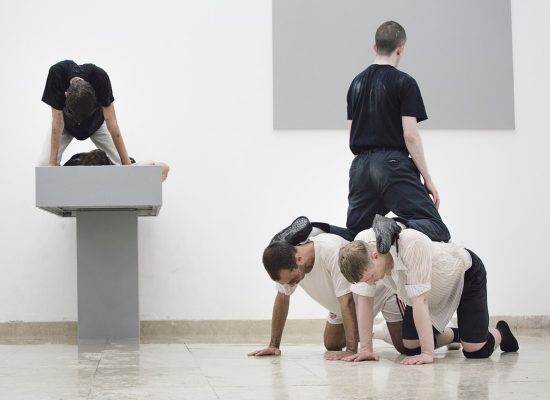