In a presentation that mirrors the original moment, but does not replicate it, Matthew Barney’s works transform complex personal and historical narratives into sculptural objects, employing an unusual range of materials pioneered by the artist: petroleum jelly, prosthetic plastic, tapioca, and cast sucrose.

In October 1991, two filmed actions, BLIND PERINEUM and RADIAL DRILL, were performed by Barney, on-site at the gallery. These videos set the stage for an elaborate narrative featuring Oakland Raider Jim Otto, and the escape artist Harry Houdini, a story line that incorporates the two sculptures, REPRESSIA and TRANSEXUALIS, which bookend the exhibition.

The climbing path featured in those pivotal early videos is recreated in the Chelsea gallery forming a guide through the sculptures, including for the first time in this configuration, DRILL TEAM: screw BOLUS, an expansive and intricate installation that occupies its own room. This large-scale work includes 44 cast petroleum wax and jelly dumbbells punctured with the same ice screws and carabiners Barney used to scale the gallery ceiling in BLIND PERINEUM.

The exhibition is accompanied by Matthew Barney: OTTO Trilogy, an in-depth publication distributed by Yale University Press, that traces the progression of the artist’s three most significant early projects: Facility of INCLINE, Facility of DECLINE, and OTTOshaft. An introduction by Nancy Spector, essay by cultural critic Maggie Nelson, and a new text by the artist offer a key to understanding major themes that appear throughout Barney’s oeuvre. 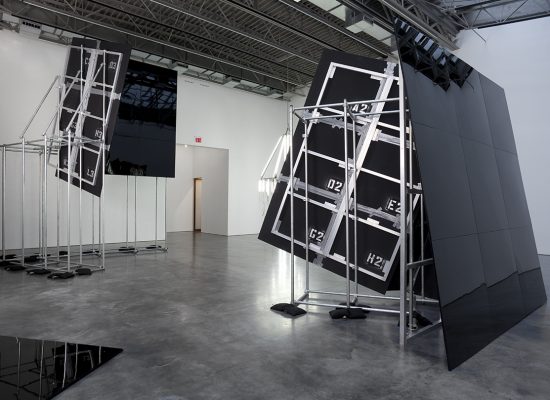