Katinka Bock is a German artist who lives and works in France. Her work, consistently shown internationally, often results from a process which takes as its starting point the different contexts of its exhibition. Consequently, Bock’s sculptural forms reflect the particular histories and geographies of the places she has visited and in which she has chosen to dwell her work. Constant throughout Bock’s practice is an interest in equilibrium, between inside and outside, past and present, banal objects and unexpected intervention. Echoes abound as Bock explores the sculptural potential of reverberation, both spatial and temporal.

Since her first visit to Guipuzkoa on the occasion of her exhibition Logbook at Artium (Basque Museum of contemporary art, Vitoria-Gasteiz) which took place in the summer of 2021, Bock has been drawn to the region’s maritime history, which has in turn influenced her most recent body of work.

Le navigateur, (2021) placed at what the artist arbitrarily designated as the center of the gallery, is inspired by a whale’s tympanic bone, an anatomical mechanism of the inner ear which allows whales to balance and orient themselves in the water. Here,
it centers the viewer within the space of the gallery, functioning as another kind of navigation system, a radar which contours to the various edges and angles of the space, and to the other sculptures on display. Bock links her sculptural practice to the aquatic spaces surrounding San Sebastian in the Bay of Biscay by referencing
the Italian word annacquato. For Atalka-Atalka, an occasional series of publications produced by Cibrián to accompany the exhibitions organized by the gallery, the artist says: “In Italian there is a term I think is lovely, annacquato, which means to dilute, and to lose one’s concentration, to blend in with the contours of life. While these are situations that interest me, they clash with my deepest interest: finding the right shape. And I think that the meaning lies precisely in that contradiction.”

A series of black and white photographs surround and complement Bock’s sculptures. Some of these photographs were taken during the artist’s first visit to the gallery, before its recent renovation, while others reflect previous and following contexts and places significant to the artist. Bock plays with the porosity of the exhibition space and its surroundings by introducing elements from elsewhere and, more literally, by creating apertures in the gallery walls through which disparate spaces may begin to contaminate one another. This is the case in her piece entitled Einsicht bewegt, (2021) for which Bock has recreated a previous corridor that was removed during the gallery’s renovation, forming a line of sight between the outside street and the exhibition space. This forced perspective forms a kind of cinematic frame, a real-time motion picture which can be viewed from either side.

By layering intersecting gestures and temporalities, Katinka Bock offers a singular reading of the spaces she encounters. Bock’s interventions form contemplative, acoustic spaces which viewers are invited to inhabit and fill. 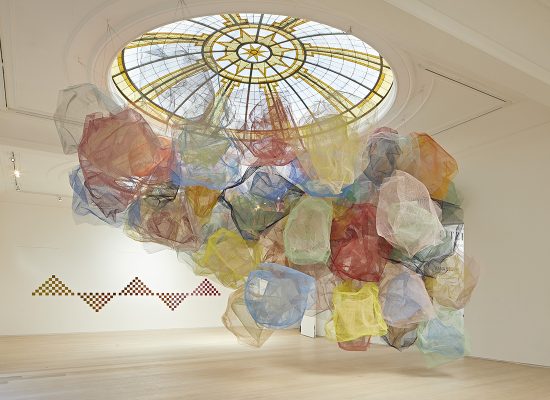