The exhibition at Tarmak 22 in Gstaad-Saanen Airport showcases works spanning the artist’s practice, including stone benches, LEDs, and paintings.

For more than forty years Jenny Holzer has presented text emblazoned on T-shirts, carved in stone, painted on canvas, scrolling on LED signs, and luminously projected onto buildings and landscapes. Beginning in the 1970s with posters wheat-pasted throughout New York City and continuing through recent light projections, her practice rivals ignorance with humour, and violence with kindness and courage. 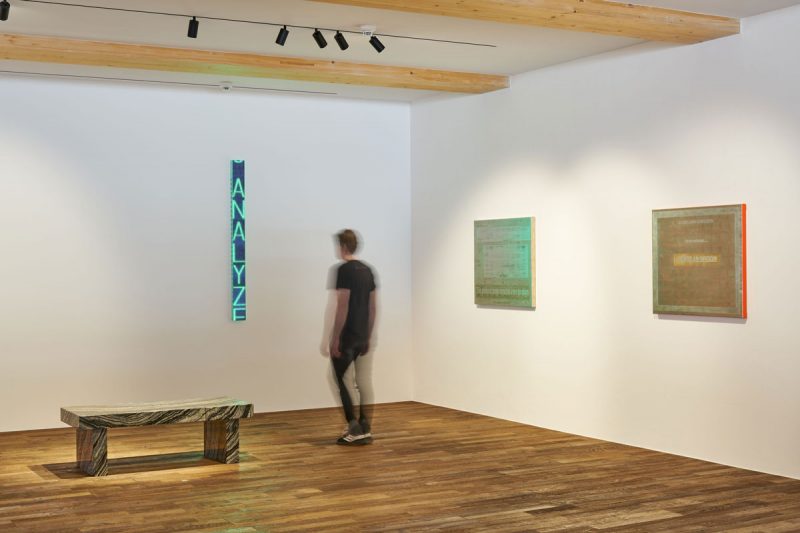 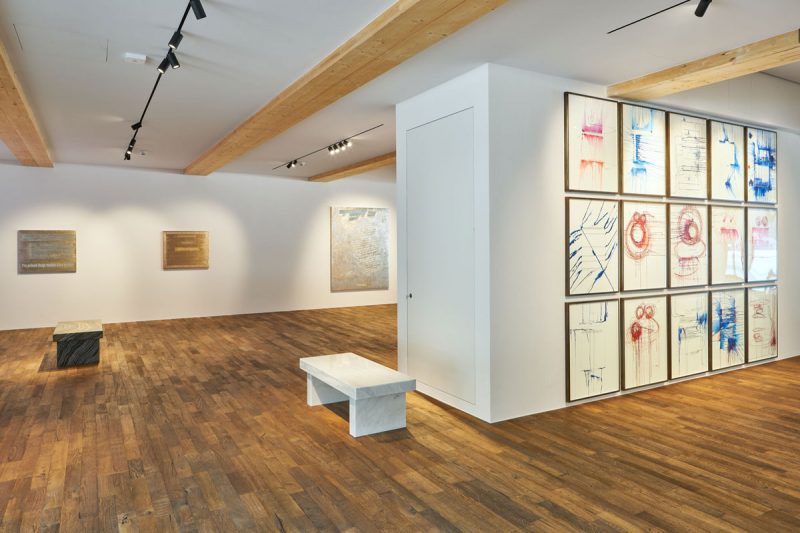 Holzer’s texts address oppression, gender, sexuality, power, and war, and by presenting them in media more commonly associated with advertising, news reports, and public information, she adeptly provokes reflection and challenges expectations and prejudices. Holzer unveils new projections on the Gstaad Palace, suffusing its architecture with language and light in a harmonious display. In 1996 the artist presented her first outdoor xenon projection on the bank of the Arno River in Florence. Since then her powerful words have illuminated culturally significant locations including the Spanish Steps in Rome, the Musée du Louvre in Paris, New York’s Rockefeller Center, London City Hall, and the Guggenheim Museum Bilbao. 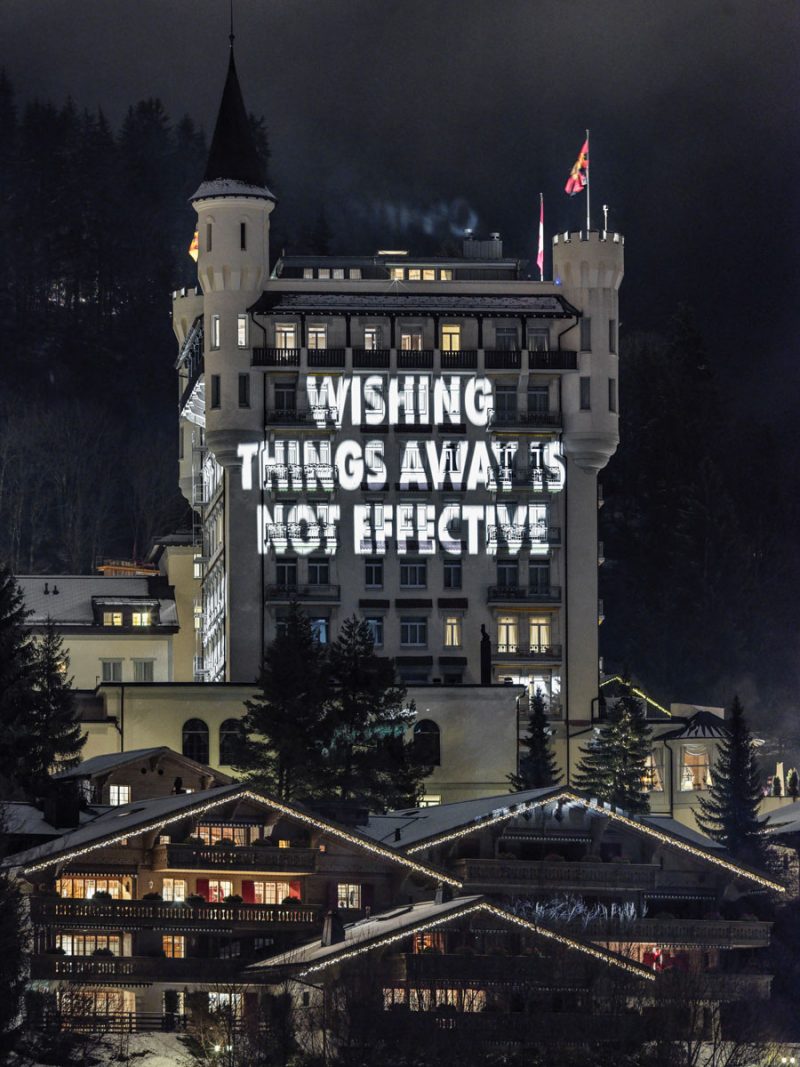 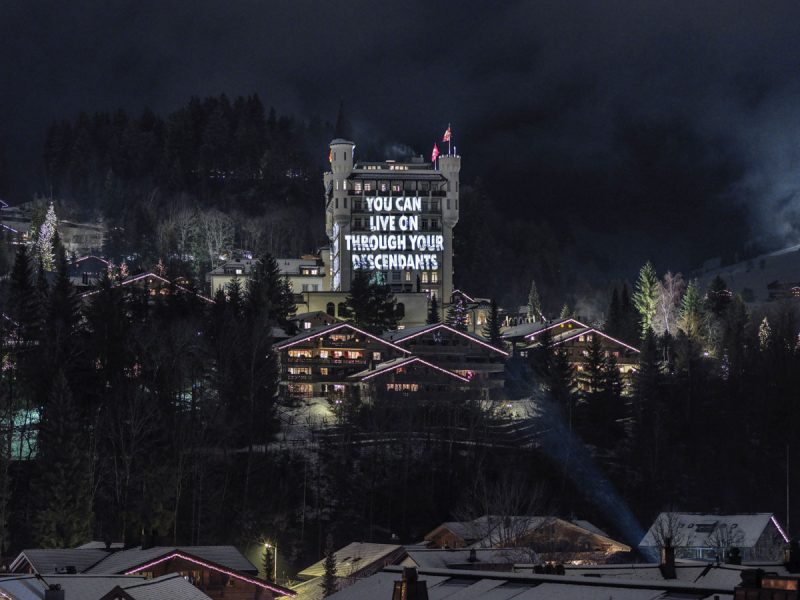 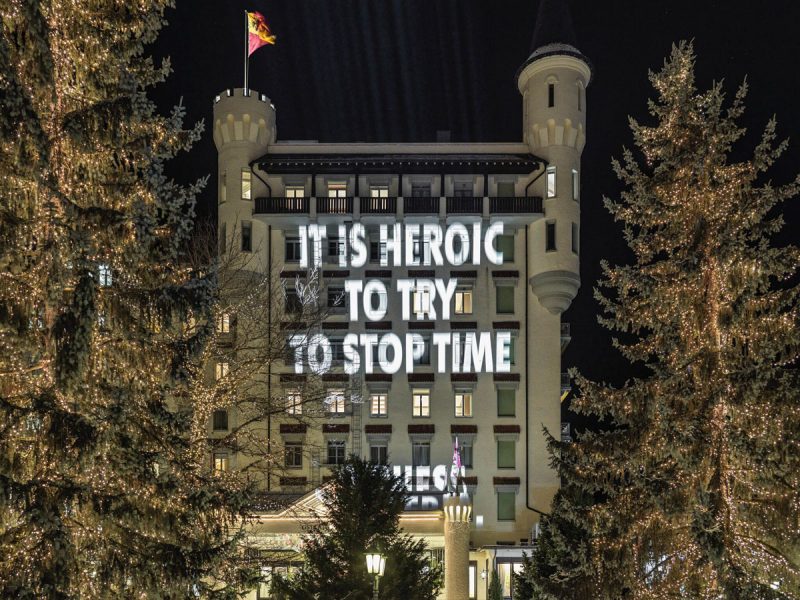 The projections for Gstaad, A LITTLE KNOWLEDGE CAN GO A LONG WAY, include Holzer’s Truisms in four languages: English, French, German, and Italian. Tarmak 22 exhibits a varied selection of Holzer’s artworks, including the LED sign SWORN STATEMENT, which includes text from a 2004 United States Army Criminal Investigation Command document that looked into reports of abuse at Gardez Fire Base, an American outpost in Afghanistan. Various witnesses were interviewed – Afghan detainees, doctors, and American soldiers, but in the end, investigators ruled in favour of the US soldiers and concluded no wrongdoing had taken place. 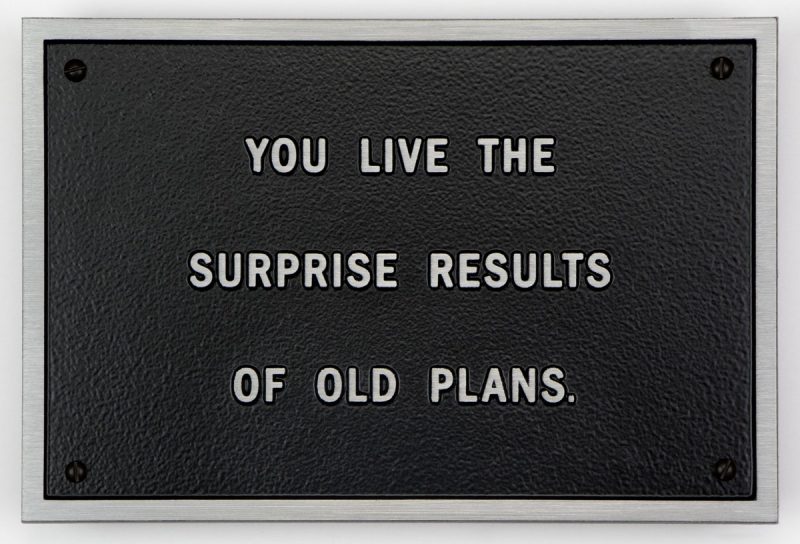 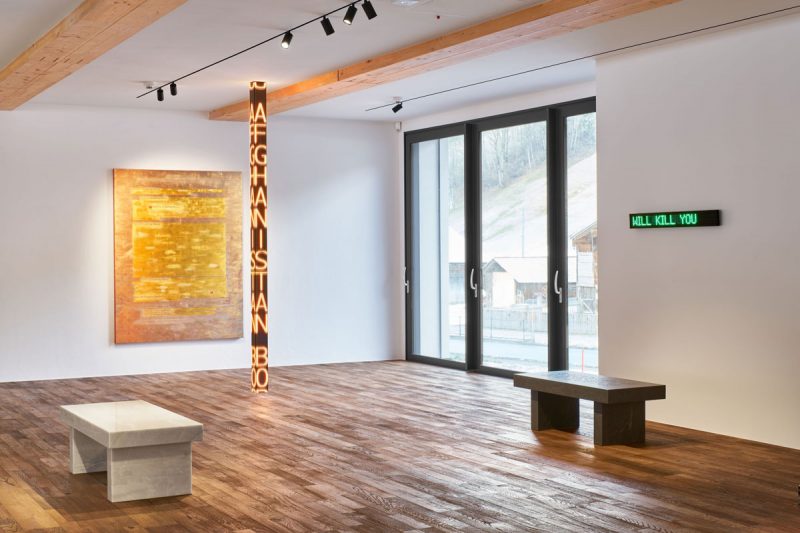 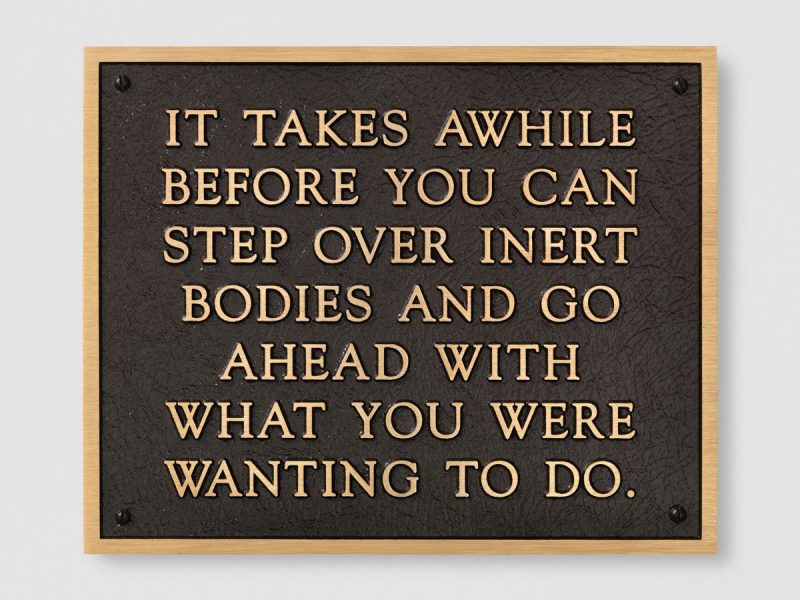 Holzer extracts these statements and displays them on the LED, presenting the brutality of war in processional, scrolling text. Words run along the sign at varying speeds, illuminating other works in the gallery. The exhibition also includes paintings from Holzer’s ongoing Redaction series. These oil on linen canvases faithfully reproduce declassified, heavily redacted US government and military papers, emphasizing a lack of transparency through bold transformations in scale, colour and metal leafing. ‘19’, a painting of an almost entirely redacted page—only the page number remains visible—is related to the indictments of Trump campaign officials Paul Manafort and Rick Gates issued in relation to Russian interference in the 2016 US presidential election. A range of Holzer’s engraved stone benches are also on display. The benches’ sculptural, permanent, and weighty presence amplifies delicate text inscriptions on their surfaces. As throughout Holzer’s work, here her inimitable use of language holds power and vulnerability, fact and deceit, and the individual and the collective in profound tension. 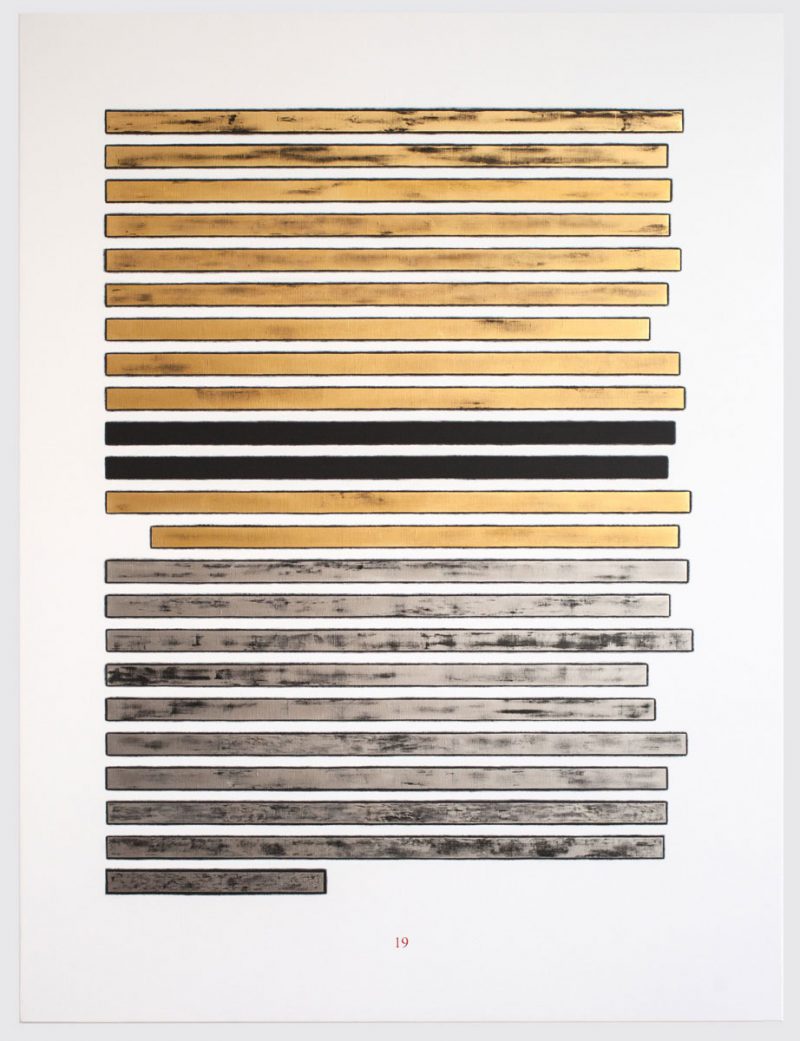 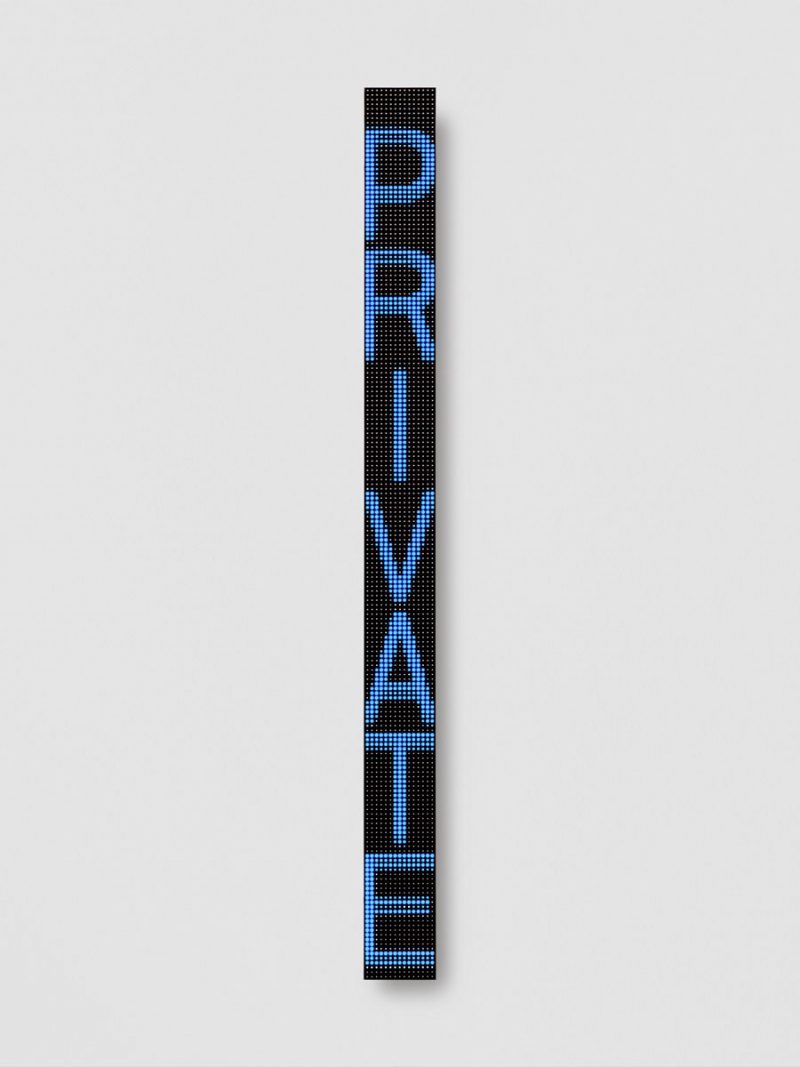