The Truth is in the Soil
Ioanna Sakellaraki

Ioanna Sakellaraki’s conceptual practice positions photography as an ontological proposition within a nexus of fiction, collage and the archive. She investigates the capacity of images not only to document an underlying reality, but also to endlessly extend our perception; mobilizing the domains of time and space and how a personal experience of grief becomes a universal journey through memory and memory loss.

The Truth is in the Soil is a 5-year exploration of grief as an elegy to her father and the dying tradition of mourning in Greece. After her personal loss, Sakellaraki’s own grieving process became the lens through which she investigates the collective mourning in Greek society, the intersection of ancestral rituals, private trauma, and the passage of time. Further inspired by the last communities of mourners on the Mani Peninsula of Greece as the doyennes of a dying tradition, the work incorporates a new kind of subjectivity, intimacy, and criticism, exploring mortuary rituals as a way of humans adapting to death. To her, these images work as vehicles for mourning perished ideals of vitality, prosperity, and belonging, attempting to tell something further than their subjects by creating a space where death can exist.

The Truth is in the Soil ends with the archive, and that is when The Interval of Unreason starts taking its shape, bringing together Sakellaraki’s father’s sealed photographic archives found after his death, landscapes, and traditional hand stitch embroidery, performed by her, and her mother. In the silence of the archive, Sakellaraki tries to grasp the texture of life from the remains left behind; on this sheet, in this box, on this clean table, and now for her eyes only. Under the starry skies and wild landscapes of the Greek island of Patmos, she begins to untangle the secret adventures of her father’s past as a sailor.

Through both manual and digital processes, she adds layers to what has been documented as real, rerouting the viewer through existing and imaginary spaces. Silhouettes of mourners gazing at mountain ranges appear weathered, time-worn and fragile with cracks and damage, whilst other images are cut out, marked, and reassembled, melding past with the present. There is a versatility throughout the imagery, shifting from black and white to color, the abstract to the figurative. Finally, Sakellaraki’s work acts as a visual representation of the gradual and irreversible loss of the departed in the mind of the living, and the simultaneous reconstruction of memories. 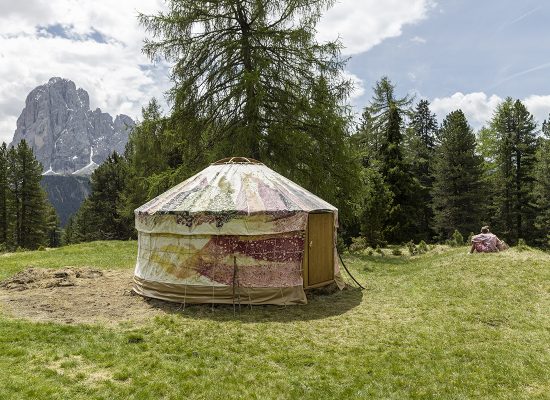