Day and Night and Day and ...
Jef Geys

Belgian artist Jef Geys built an oeuvre based on an ongoing challenge to art and its definition. His work is firmly anchored in autobiography; it resides in the margins of aesthetic contemplation and creates a constant dynamic somewhere between popular culture and drawing attention to the banal. Rejecting both the veneration of art and the reproduction of his works in catalogues, since 1971 he has opted for publishing his own journal – Kempens Informatieblad – to accompany each of his exhibitions.

How much collective knowledge can be documented and be carried by one person? Jef Geys (B, 1934-2018) is always present and nearby in his artworks. Although he might also be absent, anonymous, unformed within a form as a matter of fact. Imagine an exhibition with one hundred, so-called identical model paintings. Think of the support question and the signature? And what about the frame and the author? Jef Geys wears a knitted sweater with a framed landscape on it. The photograph was taken in his garden, trees in the background, a house centered on the knitted landscape, the sweater, the artist and the garden transformed into a support. An echo of the sweater can be found in the four ‘canevas’ idyllic landscapes, presented for the first time in this presentation.

“Do you already have a stabas?” It’s frontpage news in the local newspaper from March 1970. A new trend is spreading and can be spotted on the streets. “Some have gained a total other view on life since they are walking with their stabas.” It’s a deliberately pompous word. It means staff and can described as a round wooden stick, always of the same length and thickness. It’s softly lacquered on the outside, and hard within. Some people carry and hide their stabas in a plushy sheath. Its origin is unknown, some are relating the stabas to a Mexican subversive tradition, others refer to Geys’ camouflage methods. It’s apparently a luxurious little case, but a very present one and it will conquer the world.

“Een dag, een nacht, een dag, …” (Day and Night and Day…) is a 36-hour-long video projection of a randomly ordered compilation of thousands of photographs from Jef Geys’ archive. It was realized in 2002 for Okwui Enwezor’s Documenta 11 in Kassel and has been variously described as the ‘ultimate film’ and an ‘anti-film’. An almost endless inventory of the artists’ daily life, a photographed collection of both subject and object matter, “Een dag, een nacht, een dag, …” follows Geys’ publication from 1998 “Al de zwart-wit foto’s tot 1998” (All the Black-and-White Photographs until 1998), a five-centimetre thick volume containing approximately 40,000 contact prints. Jef Geys

In-between the house and the house journal (Kempens Informatieblad), the auto lacquered fiberglass vegetable reliefs and the stabas, the black and white photographs give an organized existence to Geys’ approach, consisting of various social, political, personal and collective methodologies. His legacy is still subverting the art garden and feeding it at the same time. 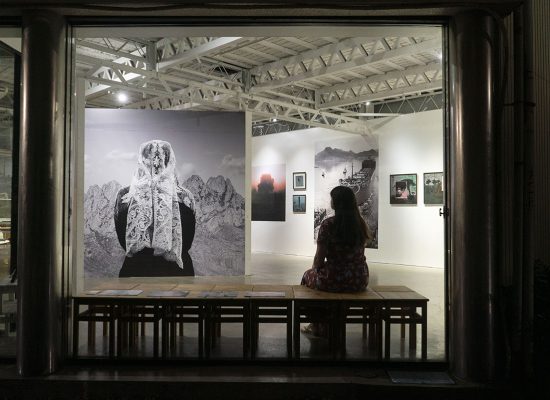