For a long time, creating images was the uncontested prerogative of painting. Today painting must compete with a plethora of other media for this rendering of perception and reality production. Never before has it been easier, and therefore at the same time harder, to produce an image than it is today. Tyrolean artist Sophie Gogl finds most of her source material online, although she usually refers to motifs from film, advertising and the media, and to pictographs and memes rather than to historical painting. She is less concerned with the motifs themselves than with the mechanisms of their emergence and dissipation in the data feed.

Her approach is as virtuosic in her versatile adoption of different painting styles and genres, as it is laissez faire in its appetite for trash. The economy of her paintings involves both an identification with her work and a certain distancing. She invests only that which is necessary to make the painting look good, as if the painting were a new outfit for a grand appearance, an ensemble that you can easily slip out of again. The fleeting execution and signs of dissolution that we attribute to art these days does not imply a loss of quality, but rather a keen receptivity to absorb other forms and images, as it were, and allow them to flow through you. Alternating surfaces lend the precarious images roaming through the net a provisional home, one less infused with the individual will of the singular artist than with the plural subjectivities of largely anonymous image producers.

“I didn’t do it”. In the past, “fecit” or “pinxit” would mean: “he (it was rarely a she) did it or painted it”. At what point does this ego that can still say “I” loud and clear feel implicated? Sophie Gogl’s new works are not fed directly from the web, yet they are affected by the rapid acceleration and subsequent fragmentation of the systems of art. Art critic Pablo Larios speaks of “touch-and-go eclecticism” with regards to contemporary art. Sophie Gogl psychologically charges her paintings, boosting their intensity, whereas on the other hand she uses the simplest materials bought from discount stores and, if we are to believe the title of the show, rejects authorship. She both ignites and extinguishes, addressing the amplitudes between energy and lethargy with the directness of a pop song. Some of the works in the gallery feature her own lyrics, leaving one wondering whether they actually originate from one or another other sources. She presents her new series in Tupperware and on large framed wood panels. Both are containers for content, as it were, as well as references to the historical, transportable panel from which the paintings have been set in motion. The artist gives her works her utmost attention, but she also lets them go again, sets them loose into the unremitting flow of data that inevitably transforms every gesture into commercially viable information. Not escapist but without illusion, her works measure the white noise between images and painting to see which of the fine-tuned dials can still be turned. 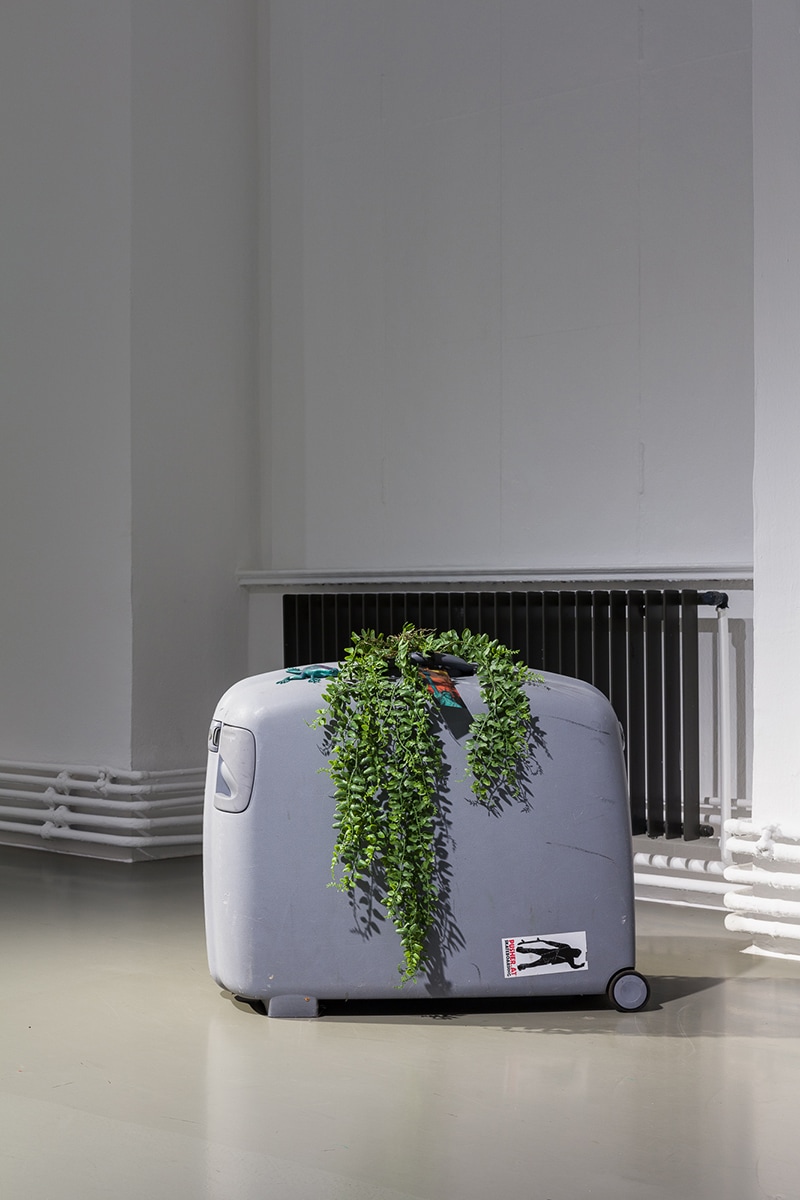