Sinta Werner’s work deals with the relationship between reality and image, two- and three-dimensionality, and the connection between digital and analogue space. In her photographic collages, installations and sculptures, she uses reflections, displacements, doublings and rotation to generate illusions or deceptions. The perception of our urban surroundings offers many starting points for her creations: thus, architecture is the motif and a surface of visual reflection in her work.

In her site-specific installations, Sinta Werner always reacts to the respective architectural and spatial conditions, blurring a clear distinction between her work and the exhibition space. For Optische Abkürzung (Optical Shortcut), she designed three freestanding frames recalling the Photoshop selection tool and thereby transferred a device associated with digital image processing life-size into the analogue, real world. Only when the viewer stands directly in front of the installation does the window front of the gallery appear to be horizontally mirrored in the frames. This illusion does not arise because of a two-dimensional surface but from a structure that becomes visible as the viewer moves around the room. The installation’s form changes according to the position of the viewer, and revealing the illusion is part of the work. Starting with the overlaying of real and represented space, Sinta Werner leads us to question the influence of the flood of digital images on our sense of reality.
She uses the technique of photo-collage to reproduce the experience of urban space as fragmentary, individual impressions. For her series Reverse Cut – A Matter of Degree, she travelled to China, exploring the geometric rationalism in the architecture of the functionally-planned urban landscape in China’s major cities. Werner subdivided the resulting photographs into sections and transferred them onto transparent, oblique and overlapping image carriers. The division into vertical fragments leads to a shifting of both the buildings’ facades and the photographic perspectives, thus negating the mathematical laws of central perspective. The viewer’s movement in the room causes a shift in perspective and changes the work (A Matter of Degree); superimpositions, densifications and displacements emerge, giving the image dynamics oppositional to the static monumentality of the building. And yet the photographs on glass do have a connection to the depicted buildings; the glass facades reflect the urban surroundings and their physicality dissolves. Through the materials she uses, Werner applies the characteristics of glass, such as transparency and reflection. The vertical segmentation of the glass object likewise references features of the existing architecture. The sections are aligned according to the characteristic shapes of the building, although not consistently. Perspectives are undermined and constructive lines, that act as rhythm and structure in the image, appear stronger, yet detached from a logic of depth graduations. 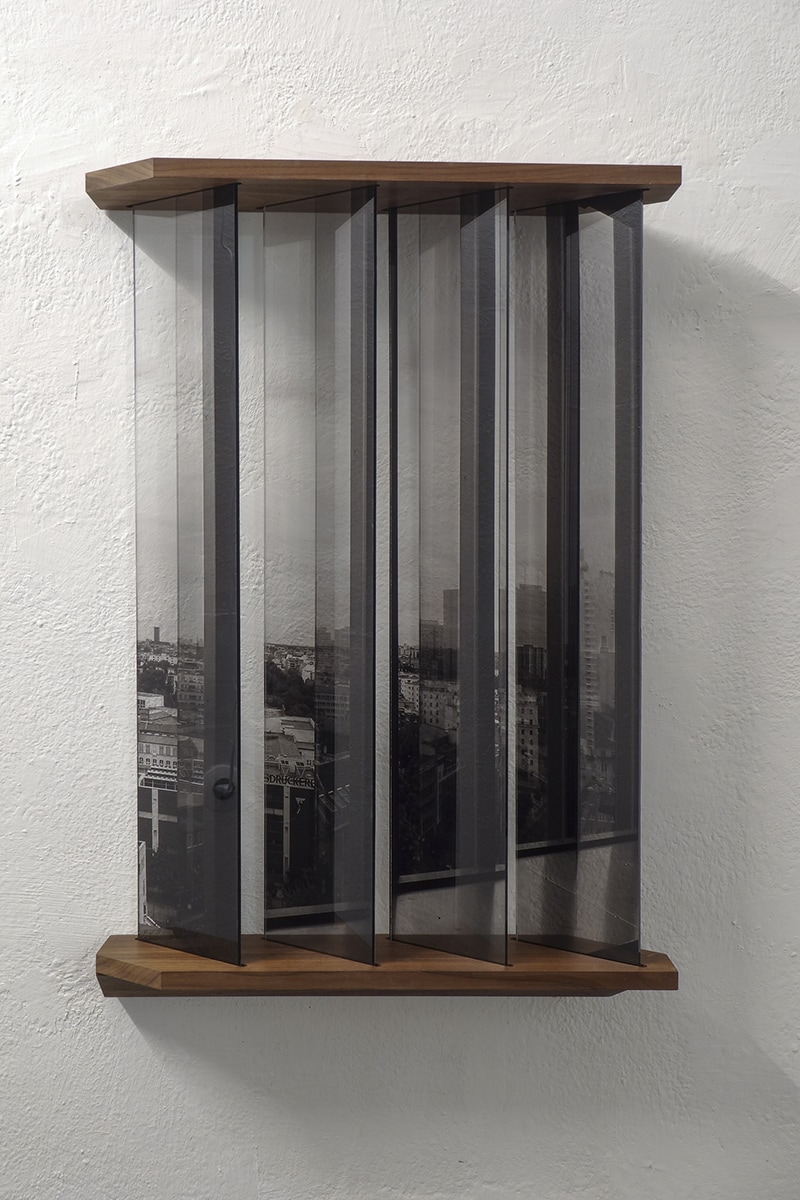 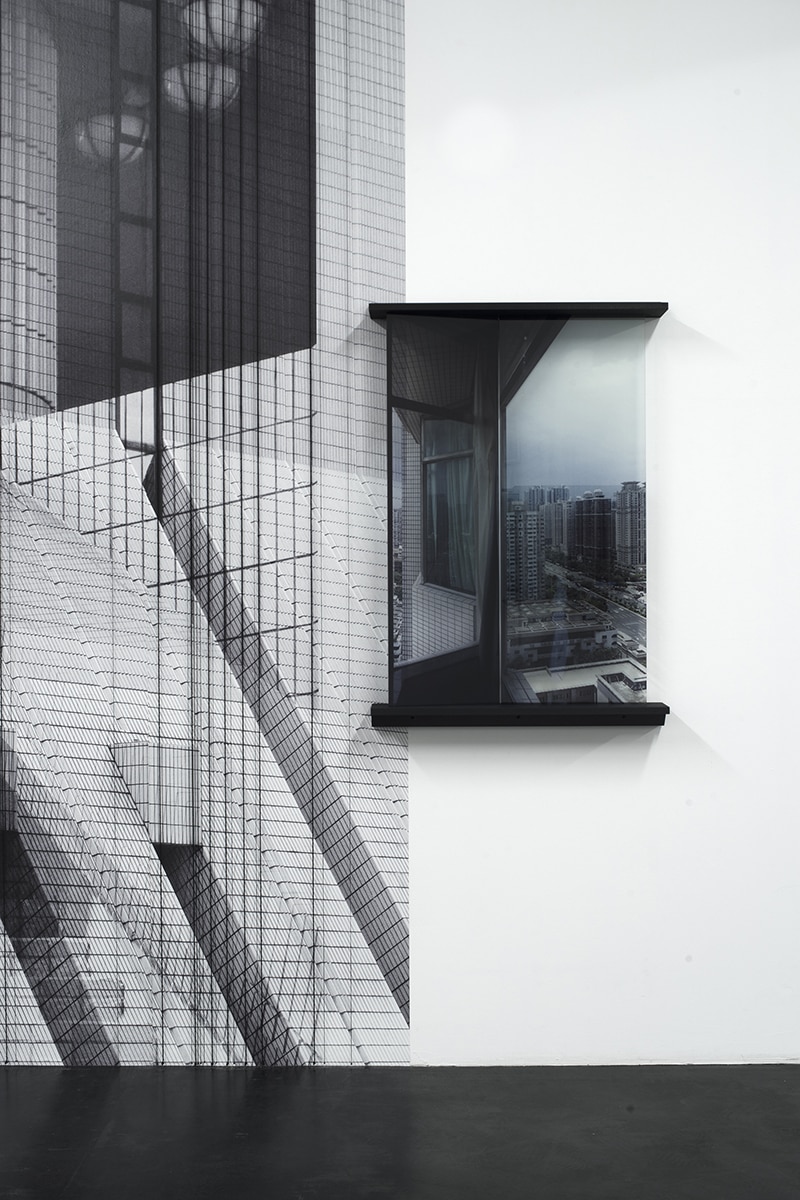 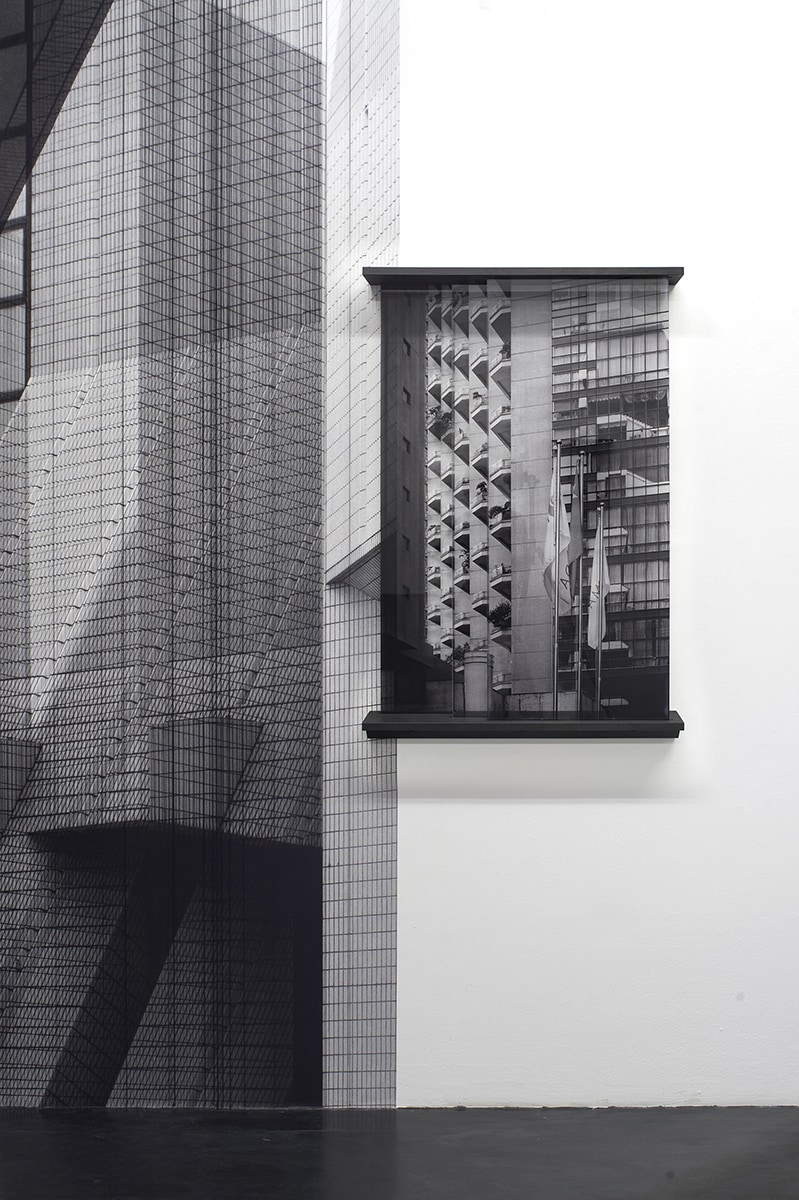