Much of my energetic output, both conceptual and physical, has been dedicated to an understanding of human nature and the construction of values, social norms and belief systems. My work suggests (among other things) that both liberation and oppression are inextricably connected, that rules will often make us feel more creative, and ideals of value and hierarchy are arbitrary yet subconsciously desired social constructs.

In the early 1990s I began working directly in the arena of my day-to-day life to develop prototypes for living systems. By exploiting myself as a “readily available” human guinea pig, I used my own experiences to construct an understanding of the world at large. For one of my first projects I lived within in the confines of a 7’ x 9’ Management and Maintenance Unit, in order to explore ways in which design and it’s accompanying ideologies could be used to turn a seeming limitation into a liberating experience.

A few years later I lived for one year with no running water, and in response created a body of work called the “Purity Series” that responded to what I perceived as the “tyranny” of bodily functions. In 1999, for another living experiment, I spent one week without access to external time, and from 1991 until the present I have been wearing “uniforms” for one season at a time. Because my domestic life and art practice are so inextricably intertwined, my practice has sometimes been mis-labled as a statement of economy, efficiency, or better living. I’m absolutely drawn to the study of all of these pursuits – but my ultimate goal is to better understand our psychological relationships to these ideals rather than to script a “correct” way to live.

The early era of modern design championed social change and challenged mainstream values. But now “lifestyle” itself has become a commodity in which identities are constructed through the act of consumption. Ann Magnuson, the performance artist, actress and key figure the NY east village scene in the 1980s, once presented a slide lecture in which she showed images of apartments where she and her friends lived in during the 80s. These spaces were dirty, worn, out and utterly derelict – very different than the tasteful dwellings that artists now cultivate. Her message was that during the 1980s “time” was a more valuable commodity than material possessions or good taste. The primary goal of her peer group was to live on the lowest budget imaginable to have the time and freedom needed for their creative work. In essence, a creative life was the end goal for these artists rather than using creativity as a marketable skill.

As the consumption of good taste becomes a driving force in our culture, I am motivated to maintain a somewhat subversive and critical voice – one that draws in the viewer with something that seems familiar, but then presents challenging questions about the system that generates these desires. I want to provoke people to constantly question what they can live with, and what they can live without.

Some of my works that I feel have best achieved this goal have been the A-Z Uniform series, ongoing for over 20 years as a challenge to the societally imposed dictate for variety. The uniform series asks if having multiple outfits truly frees us to express our individuality, or if in fact, having a simple self appointed “constant” can create a sense of ease and liberation.

Another series of work under the larger heading of Raugh Furniture explores social norms in the domestic realm – including the assumption that chairs are the most comfortable way to rest the body (anthropological studies have shown that in fact it is not). Raugh first started out as a self-invented ideology, that among other propositions, proclaims that designs for objects that “camouflage dirt” or those that “decay beautifully” may actually be superior to those that are easy to clean or long lasting, but ugly once they start to chip and break down.

As an artist I have the DNA of an object maker, I love the physical and intellectual challenge of “making”, but as a philosopher I question our attachment to objects and materialism. Because of this, my long-term project, AZ West is a site where physical works are created and lived with as an experiment in “investigative living.” 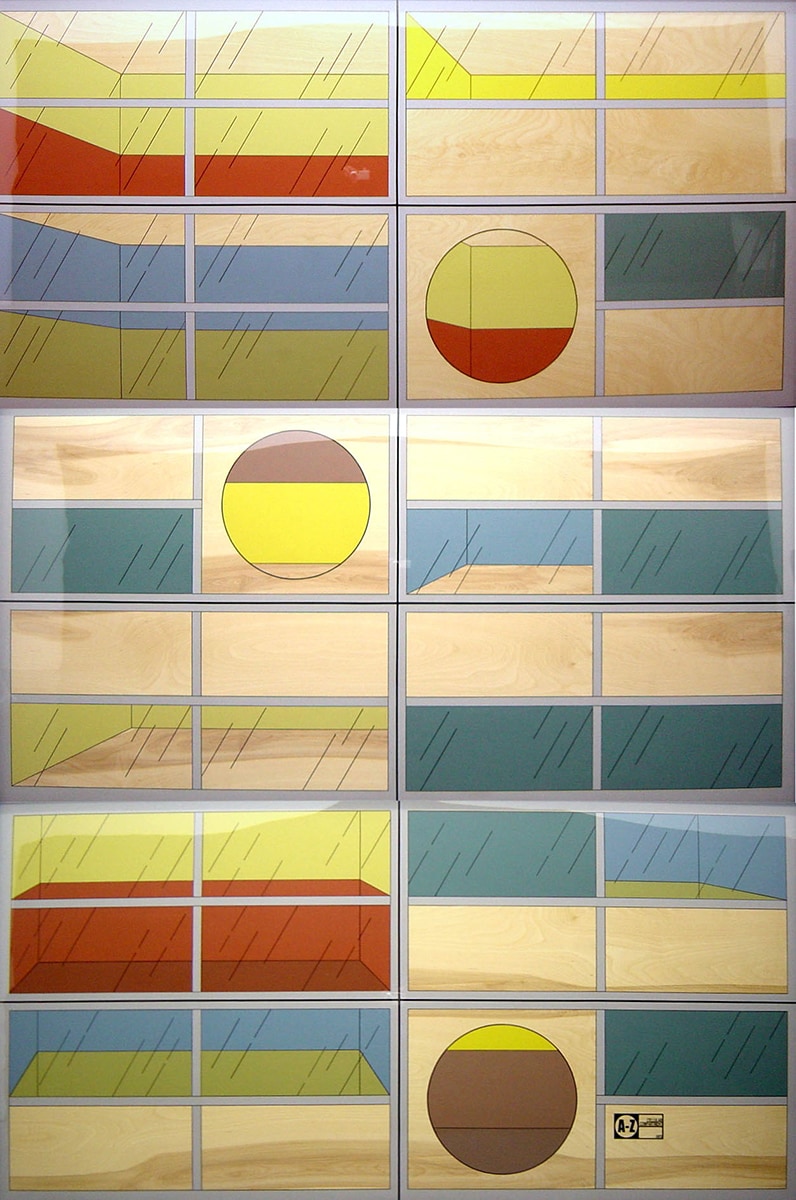 Located in the Southern California desert adjacent to Joshua Tree National Park and about a two and a half hour drive from Los Angeles, A-Z West originally started out as a five acre property and a 600 square foot homestead cabin. Since the year 2000 it has grown to an 80-acre compound that includes a main house where I live with an ever evolving succession of prototypes for living, a studio that includes production area for my own work and communal weaving studio, three renovated homestead cabins for various additional experimental living projects, a Wagon Station Encampment and an area with larger outdoor works that are accessible to the public.

If A-Z West exists primarily as a forum for my own personal thinking and explorations, High Desert Test Sites is a parallel organization that that I helped found in 2002 as a forum for other artists. HDTS focuses on art that explores the intersection between contemporary art and everyday life. As a conceptual entity the project is dedicated to “learning from what we are not”.  We believe there are many ways to live, and that learning from others can offer new insight and perspectives on ourselves.  We have organized both large events and intimate projects with hundreds of contemporary artists – and yet an equal amount of our focus and energy is spent supporting and cultivating relationships with individuals in the surrounding community who have made their work their life practice. We are continually inspired by these people who are totally dedicated, and create intellectually rigorous and culturally relevant works regardless of economic factors, or whether or not they have an audience who considers what they are doing art.

Ultimately I believe that this conversation, both in my practice and in the projects that I help organize, engages a discussion that is larger then art – and yet art is in many ways it’s perfect vehicle. The very nature of art is fluid, ephemeral and sometimes even arbitrary, and yet it’s core message is based on a discussion of what generates value and meaning in our lives. Art in it’s best manifestation has the potential to make us more critical, informed and empowered as individuals. I am inspired by a lineage of artists ranging from the Russian Constructivists, Bauhaus, Allan Kaprow, and Anna Halprin who have made significant inroads in developing a language of art that intersects with these concerns of everyday life.